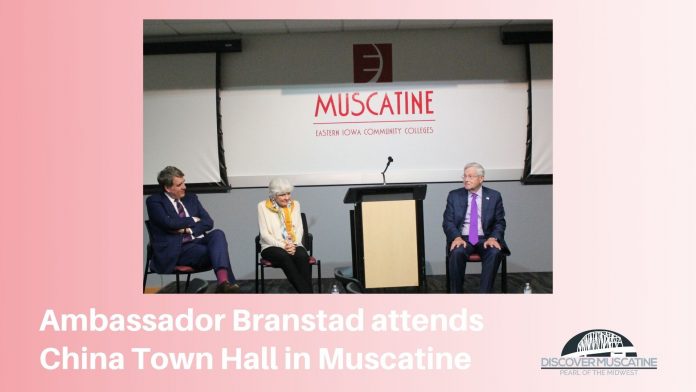 The Grateful Column: The Weigand Effect

MUSCATINE, Iowa–For many midsized Midwestern towns, international relations with China may seem somewhat remote from their day to day lives. However, Muscatine has had a unique connection with China since 1984, when Muscatine residents Sarah Lande and Joni Axel first participated in the Iowa Friendship Force trip to China and later got involved with the Iowa Sister States initiative, which brought five young Chinese officials, including the now President of China, Xi Jinping, to Muscatine.

Following the national broadcast, students in Muscatine High School’s Chinese classes greeted Branstad with a special song in Chinese their teacher, Heidi Kuo, composed for the occasion. Then, Branstad took the stage along with Axel, Lande, Muscatine Community College President Naomi DeWinter, and his longtime colleague Steve Churchill to answer questions from the panelists and talk about his own time in China.

Branstad shared that even after the initial delegation from China left Iowa, he remained interested in U.S. China relations. During his second stint as governor, Branstad visited China for the first time since 1984. While there Xi, then the vice president of China, invited Branstad to visit him at the Great Hall of the People, a high honor. When Xi spoke of his “old friends” in Iowa, Branstad invited him to come visit if he ever returned to the United States. Feb. 15, 2012, Xi visited both Muscatine and Des Moines, reconnecting with many of the people who he met on his first visit.

Because of Branstad’s long relationship with Xi, Branstad’s son, who worked for President Donald Trump’s election campaign, encouraged the president to appoint him ambassador to China. After a meeting in New York with Trump, where Branstad says his wife and not himself made the call that he could go to China, Branstad received confirmation to the post in May 2017. He then spent three years in China, visiting 26 of its 31 provinces and autonomous regions before COVID-19 led to travel restrictions. He also worked with top level advisers in every US department to deliver the president’s foreign policy decisions to the Chinese government as effectively as possible.

In his many dealings with Xi, Branstad found him a complicated individual. “It’s a difficult situation,” Branstad observed. “I think a lot of us are disappointed,” he added, noting concerns about China’s treatment of the Uyghurs and Taiwan and the amount of surveillance it performs on its own people. Still, he found the personal respect with which Xi treated him and his family quite remarkable. “I try to take a balanced view,” he said.

MUSCATINE, Iowa—Though the Salvation Army of Muscatine County does important work for the community throughout the year, they set...
Muscatine Area News