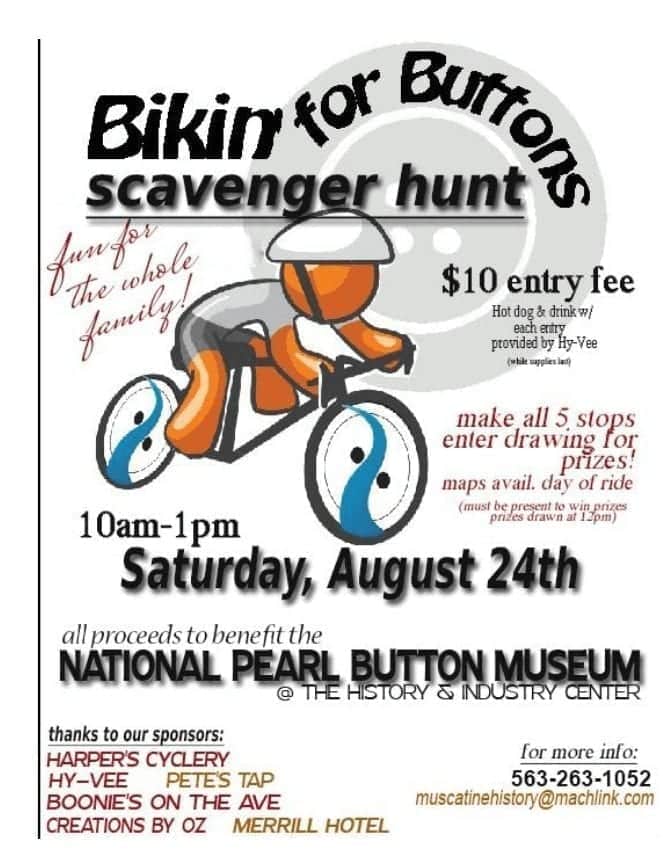 As summer winds down, bikers of all ages want to squeeze in as many rides as they can before school starts and the weather turns colder. To help riders get their fix, and to help promote an important aspect of Muscatine’s history, the National Pearl Button Museum @ History and Industry Center (NPBM) will host its first ever Bikin’ for Buttons ride on Saturday, August 24th.

A new event this year, Angie Weikert, Office Manager for the NPBM, explained that Bikin’ for Buttons will incorporate the best parts of a, “bicycle ride, scavenger hunt, and pearl button history lesson,” all while supporting the NPBM. On August 24th, all participants will meet at the NPBM at 10:00 am to pay their $10 registration fee and to get a map of the course. All of the money raised will go to support the NPBM, which operates as a non-profit organization.

From there, cyclists will travel down the riverfront bike path, stopping at various points to learn about significant events in Muscatine’s pearl button industry that took place nearby, and to collect the clues and items they will need to complete the scavenger hunt. Weikert elaborated, “they will stop at interest points pertaining to button history–each stop will have some kind of button history trivia, and a colored button to collect.”

When bikers complete the ride, they will have the opportunity to use the knowledge and colored buttons they collected in a final competition for one of five golden buttons, each worth a cash prize of $10 as well as two entries into a drawing for prizes from Art by Vada, Boonie’s on the Avenue, Creations by Oz, Harper’s Cycling and Fitness, the Merrill Hotel, and Pete’s Tap. Anyone who collected all five buttons but did not find a golden button may still turn in their buttons at the NPBM for a single entry into the drawing. After the ride, all entrants may visit the NPBM to enjoy a free hot dog and drink, courtesy of Hy-Vee.

As the NPBM prepares to host Bikin’ for Buttons, Weikert looks forward to welcoming many cyclists of all ages to the event. “We would like a good turnout since this will be our first annual bike event,” she stated.

More than just getting a good turnout, Weikert anticipates many people will visit the NPBM as well and learn a little bit more about the industry that truly helped put Muscatine on the map. “We were nominated number one on the Best of the River Road Best New Attractions for 2019 along the Great River Road. [We hope people will come] learn of Muscatine’s pearl button past, and its national growth significance,” she shared.

With Bikin’ for Buttons just days away, Weikert and everyone at the NPBM look forward to welcoming you to ride with them during this one of a kind event. If you have any questions about the event, Weikert encourages you to contact her at (563)-263-1052 or [email protected].

MUSCATINE, Iowa—As the dispatch center for all of Muscatine County, MUSCOM responds to all kinds of emergencies before anyone else, making sure...
Read more

MUSCATINE, Iowa – The Muscatine Public Safety Building (PSB) is now closed to the general public according to officials with the City of Muscatine.