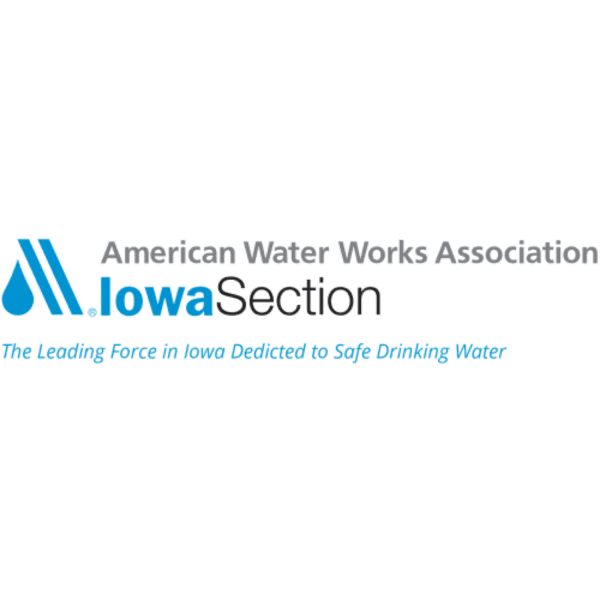 American Water Works Association Iowa Sectionhttps://www.awwa-ia.org/
The American Water Works Association is an international, nonprofit, scientific and educational society dedicated to providing total water solutions assuring the effective management of water. Founded in 1881, the Association is the largest organization of water supply professionals in the world. Our membership includes over 4,300 utilities that supply roughly 80 percent of the nation’s drinking water and treat almost half of the nation’s wastewater. Our 51,000 total members represent the full spectrum of the water community: public water and wastewater systems, environmental advocates, scientists, academicians, and others who hold a genuine interest in water, our most important resource. AWWA also takes great pride in helping establish two preeminent organizations dedicated to safe water, the Water Research Foundation in 1966 and Water For People in 1991. AWWA unites the diverse water community to advance public health, safety, the economy, and the environment.

Moreno had an Iowa-based higher education, earning an associate’s degree at Kirkwood Community College in water and wastewater technology, a bachelor’s degree in general science, and a master’s in civil and environmental engineering from the University of Iowa. He has lived and worked in eastern Iowa for most of his 36-year professional career, making significant contributions and providing sound leadership in the water field.

His career began in 1980 with a five-year term as an operator for the University of Iowa water plant. Then, a shift in focus took him to Region Six of the Iowa Department of Natural Resources for three years, where he served as an environmental specialist, environmental program supervisor, assistant regional administrator, and regional administrator. He then returned to municipal service in 1987 where he worked as assistant water superintendent for seven years and then water superintendent for 21 years for the Iowa City Water Division.

He led the Iowa City water utility through a complete transformation of its water source and treatment. From the early 1990’s through the mid 2000’s, he oversaw the design and construction (in multiple phases) of new source water facilities, state-of-the-art water treatment facilities, and finished water transmission system improvements. During that very complex process, his long-term vision and diplomacy skills proved key factors in accomplishing the goal of providing a safe and reliable supply of water for Iowa City.

Moreno has actively participated in the Lions Club for many years and served as a past president of the West Liberty Lions Club. He currently serves as president of West Liberty LULAC Council 310, previously chaired the Muscatine County Master Gardeners, volunteered as a Greater Muscatine Chamber of Commerce and Industry ambassador, and for several local service organizations. He co-founded the West Liberty Youth Dream Catchers, an organization providing mentoring and scholarships to foster youth interest in higher education.

His wife, son, and daughter work as dentists; all graduates of the University of Iowa College of Dentistry. Wife, Dr. Carol, and son, Dr. Roberto, own Gentle Family Dentists and have two offices, one in West Liberty and one in Muscatine. Moreno currently holds the position of Chairman of the American Water Works Association’s Fluoride Standards Committee.