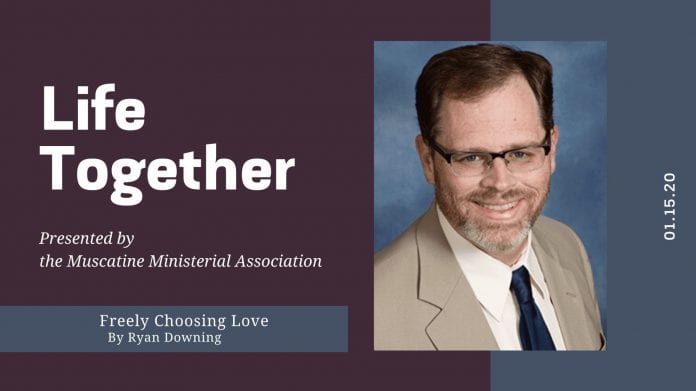 Ryan Downing
Ryan Downing has been pastor of Faith UCC since September 2016. He has a passion for exploring faith, spirituality, and the common good with others, both in and outside the church.

Tuesday, September 22nd was the first official day of fall and with that comes less daylight into...
Read more

I headed off this morning to yet another pre-op appointment and after a couple handfuls of these...
Read more

We live in one of the great breadbaskets of the world. We are all well aware that...
Read more

This coming Monday is Martin Luther King, Jr. Day. Firmly rooted in his Christian faith, King was a staunch advocate of interfaith understanding and cooperation as well as social and economic justice. He was also a religious extremist, but not the kind that we often think of today. As he wrote in his “Letter from a Birmingham Jail,” “The question is not whether we will be extremists, but what kind of extremists we will be? Will we be extremists for hate or for love?”

Knowing that I do not always get it right, I try to choose love, and that’s why three years ago, my family and I, along with a few others from Muscatine, joined a couple thousand other Iowans at the Women’s March in Des Moines. The night before the march, my daughters and their friends made a big, beautiful sign that read, “Girl Power.” Upon arriving at the Iowa Statehouse grounds for the festivities, we were surrounded by a sea of other colorful, catchy signs. Naturally, I thought my daughters’ sign was the best.

However, in the diverse mass of people, there was one sign that broke my heart. It was of a cross and around the cross was a circle with a slash cutting across the middle. The sign read, “Freedom of religion is not freedom to discriminate.” What broke my heart was not the sign’s message. I wholeheartedly agree that freedom of religion should never be construed as a license for anyone to discriminate against others in matters of employment, housing, or business. What broke my heart was that this is exactly how many people now understand all religions today to be, as the voices of extremist exclusion have been increasingly amplified over the past few years.

Of course, there are many different flavors to any one religion, whether that be Christianity, Judaism, Islam, or anything else. Still, the flavors that seem to get an inordinate amount of the attention are those that are leaving many people with a bad taste. Thus, it comes as no surprise, as the Pew Research Center’s survey on religious life in the United States has shown, that our religious landscape is changing. With sharp increases in “nones” (those with no religious affiliation) and individuals who identify as “spiritual-but-not-religious,” many people are increasingly less likely to seek out a religious community. And yet, as a Christian pastor and as someone who values our world’s religious diversity, I know there is so much more to the story.

Right here in Eastern Iowa, there are a whole variety of churches, synagogues, mosques, temples, and meditation centers that are the first to help fill local food pantries, volunteer in times of need, welcome the stranger in their midst, and help their communities in any number of ways. These also are places where the work of caring for the heart and soul happens, the kind of work that can be just as important, healing, and transformational as anything else. And these are the places where, as King and his movement exemplified, people like you and me can freely choose to be extremists for love in a world of extreme needs.

Detour for MuscaBus Yellow Route is now in effect

MUSCATINE, Iowa – A change to the MuscaBus Yellow Route was announced by City of Muscatine Public Transit due to the construction at the intersection...
Read more
Muscatine Area News

MUSCATINE, Iowa--Settlement payments in the Freeman vs. Grain Processing Corporation lawsuit will after Sept. 30, according to a statement issued Grain...
Read more
Local Government and Politics

Tuesday, September 22nd was the first official day of fall and with that comes less daylight into the evening. While I might...
Read more

I headed off this morning to yet another pre-op appointment and after a couple handfuls of these in the last few years...
Read more

We live in one of the great breadbaskets of the world. We are all well aware that as soon as we leave...
Read more