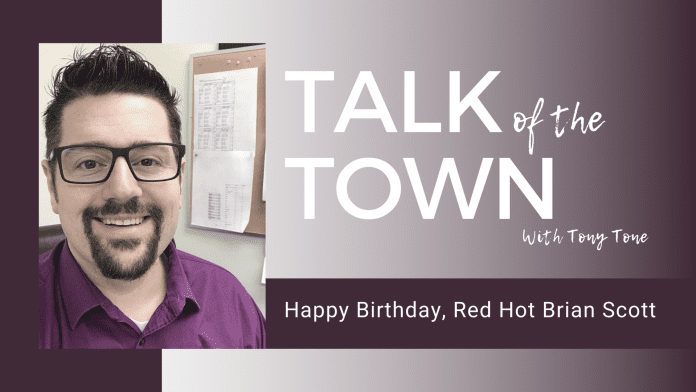 Tony Tone
Tony Tone has worked as a radio personality in Muscatine and the Quad Cities since 2006. He currently serves as Muscatine Community School District Communication and Community Outreach Director and writes Talk of the Town with Tony Tone for the Discover Muscatine newspaper.

Last Thursday, April 7, my former radio co-host, Red Hot Brian Scott, celebrated his birthday. I was happy to see Red Hot and his better half, Lindsy, over the weekend during their stay at the Merrill Hotel in downtown Muscatine.

I’ve known Red Hot since 2005, when I was a part-time radio personality for the long since defunct The River 104.9 radio station. I’ve probably shared this story before, but Red Hot took a chance on a then 23-year-old me to allow me to fill in after his previous co-host, Darik, had departed. I was only supposed to work one day, but because things went well on-air, I was invited back the following day and the next. That week (in December of 2006), I was also taking finals at St. Ambrose University and preparing to graduate. On Friday (that week), I received the formal job offer to join Red Hot on B100/99.7 in Davenport. I graduated Saturday, and the next five and a half years felt like a blur.

We were so busy, and one of the things I admired (and still do) about Red Hot is his ability to hustle and self-promote. You see, we didn’t have a promotional budget for anything. All of our banners that featured the Red Hot & Tony Tone logo were either purchased by Red Hot or traded out (via advertising credit). This included when Red Hot purchased a vehicle wrapped with one of our logos. We worked exceptionally well together and enjoyed a lot of success in the radio rating war. At one point, B100 was billing more in sales than 97X (sorry, Dwyer & Michaels)!

So where is Red Hot Brian Scott now? He’s hosting a morning radio show on Z92.3 in Peoria, Illinois. He’s also taken on a lot more in this role, as he also serves as their operations manager and will be doing work for a few more stations that Cumulus Media (his employer) just acquired. Red Hot loves radio and has worked to make it a career. The radio business is tricky, and when ratings aren’t where they should be, you feel it. When you’re committed to your craft and understand how important a strong relationship with the sales and business side of things is, you’ll always be successful.

Plus, at the end of the day, it’s all about serving your community. We did that together in the Quad Cities, separately during my solo time on-air here in Muscatine, and Red Hot continues to do the right things for the Peoria market.

It’s kind of strange how when I look at photos from the Red Hot & Tony Tone days they can feel like they were taken yesterday while at the same time a lifetime ago. I have no regrets about my time spent working with Red Hot, and I’m grateful for the friendship that we have retained.

Happy (insert a number that is probably a few years younger than it should be) birthday, Red Hot Brian Scott!