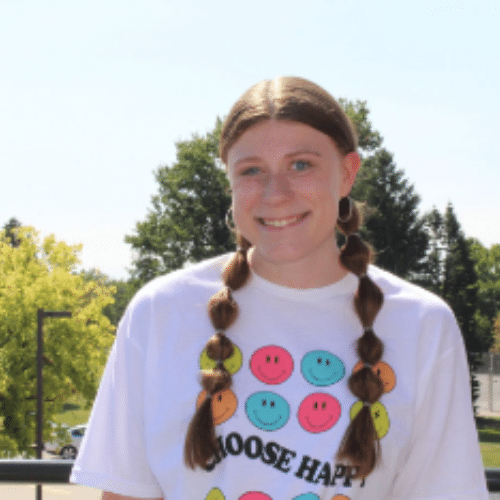 Stella DeLong
Stella DeLong is a junior at MHS, and this is her first year being on the staff! She spends most of her time dancing, teaching dance, and spending time with friends and family!

If you are a “Friends” lover and think about what Chandler is like, what do you think about? Well, you might think of somebody who is funny, light-hearted, and a little sarcastic. His personality is very similar to our staff member Kenzie Lemkau.

Kenzie spends a lot of her time working, spending time with her family and friends, and playing softball. She stays busy with all of these things and says it’s important to always try her hardest at them.

Kenzie plays on the QC Cannons, where she plays mostly left field. She has been playing softball for 10 years. She says that she struggled for the first few years, but after she played in 12U she hit a turning point. She started to feel more confident in her abilities. Her current team is an 18U, and they have won state and nationals.

Kenzie said: “If there is one word to describe my team it is unified. We work really well together and we are a fun team.”

Kenzie is a person with many passions and one happens to be music. “If I could listen to one song for the rest of my life, it would be ‘Little Freak’ by Harry Styles.”

She also mentions that she loves Louis Tomlinson and all of the boys in One Direction. Her music taste consists of One Direction, 5 Seconds of Summer, Taylor Swift, Conan Gray, and Olivia Rodrigo. She loves a lot of different artists, but these are some of her favorites. Kenzie is going to see Harry Styles in October, which she is very excited for.

This is Kenzie’s first year on the newspaper staff. She said she wanted to join this class because it would improve her writing skills and help her open up. Even though she wants to go into psychology, she believes that this class will still help her grow in many aspects of life. Another big factor in Kenzie wanting to join this class is the teacher.

“Mrs. Rauenbuehler is one of the most inspirational teachers I’ve ever had. She is another adult figure I can trust and who helps me through a lot,” Kenzie said.

She wanted to be in a class with Mrs. Rauenbuehler, and she felt like newspaper was the right fit. Someone else who helps Kenzie through a lot is her best friend Nikki. She said that they have been friends for a very long time, and Nikki is her closest friend.

“She is literally the funniest person alive,” said Kenzie. She says that Nikki can always make her feel better.

Even though Kenzie enjoys doing a lot of different things, she makes time for all of them. She loves to stay involved and do the things she is passionate about.