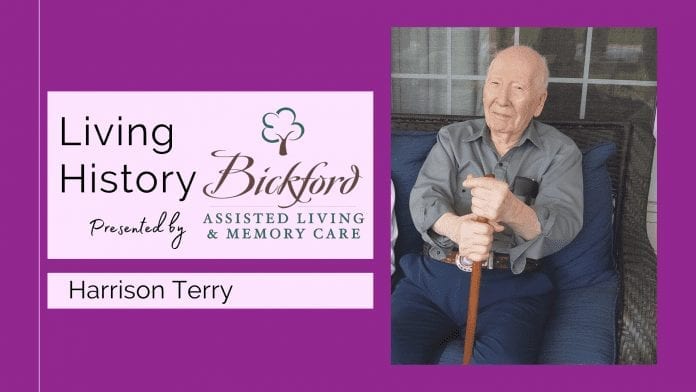 Tuesday, September 22nd was the first official day of fall and with that comes less daylight into...
Read more

I headed off this morning to yet another pre-op appointment and after a couple handfuls of these...
Read more

We live in one of the great breadbaskets of the world. We are all well aware that...
Read more

Born at his family’s home in 1926, Harrison Terry has lived his whole life in Muscatine County, save for a brief period when he worked in Cedar Rapids.

During World War Two, Terry worked making landing ship tanks at Chicago Bridge and Iron before getting drafted into the Navy at the age of eighteen. Sent to China, Terry served a two year tour of duty. Following his service, he received an honorable discharge as a third class motor machinist.

After returning home to Muscatine County, Terry married his wife, Betty Plowman, on January 11th, 1947. Terry has many joyful memories of the day, particularly the lengths he went to to make sure he and his wife had a legal ceremony. At the time, all marriage licenses required a blood test, which they had done in Iowa City. “In those days, you had to get married in the county you had the blood test in, so we drove to Tipton, got the minister, crossed the Johnson county line, and said our ‘I do’s’ on a random country road in the middle of January,” he recalled.

Once married, Terry worked in construction in the summers, and took particular pride in helping to lay a pipeline that crossed the Mississippi River in the Quad Cities. In the winter, he worked for Kent Corporation. His wife worked at Grain Processing Corporation and later at Heinz, where she eventually retired from. The couple also raised three sons and a daughter.

Throughout their marriage, Harrison and Betty Terry both felt a special draw to Muscatine County. As Terry put it, “I don’t know, we just always came back here.”

In October of 2017, the Terrys moved to Bickford. Betty Terry passed away that same year. Terry chose to go back and spend several years in the home they had owned. However, in February of 2020, he decided to return to Bickford permanently. “It’s not as good as home, but I like it here just fine,” he explained.

Detour for MuscaBus Yellow Route is now in effect

MUSCATINE, Iowa – A change to the MuscaBus Yellow Route was announced by City of Muscatine Public Transit due to the construction at the intersection...
Read more
Muscatine Area News

MUSCATINE, Iowa--Settlement payments in the Freeman vs. Grain Processing Corporation lawsuit will after Sept. 30, according to a statement issued Grain...
Read more
Local Government and Politics

Tuesday, September 22nd was the first official day of fall and with that comes less daylight into the evening. While I might...
Read more

I headed off this morning to yet another pre-op appointment and after a couple handfuls of these in the last few years...
Read more

We live in one of the great breadbaskets of the world. We are all well aware that as soon as we leave...
Read more