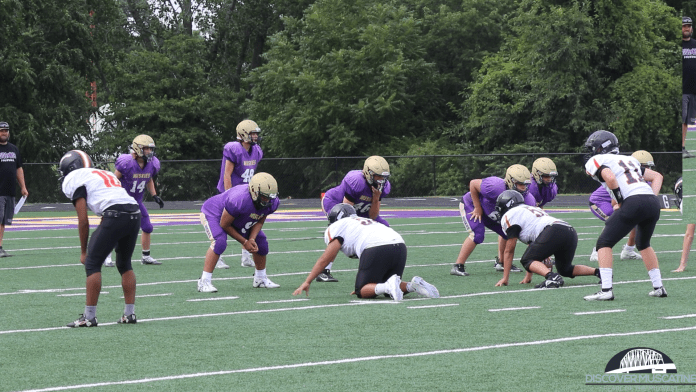 MUSCATINE, Iowa–For the first time ever, all of Muscatine’s fall sports teams and their supporters came together in the recently renovated Muscatine Community Stadium. A local favorite since its creation, the Fall Sports Kickoff took place Aug. 19, wrapping up before the night’s rain could drive any fans away.

Because athletes go through a remarkable quantity of sports drinks in a season, the Muscatine High School athletics departments requested all attendees donate one bottle of Gatorade to ensure that they had enough for the coming months. The Muskie Boosters also sold their traditional Muskie Chops meals, with all of the proceeds from them going to support fall sports. This year, the demand for the meals proved so high that the boosters sold out, a great sign for the support students in all sports and activities will receive this school year.

To start the evening’s entertainment, members of the freshman and sophomore football teams scrimmaged against players from Washington High School before all three of the Muscatine High School football teams introduced themselves. Then, the Mighty Muskie Marching Band played while the cheer and poms teams introduced themselves and then did a combined routine.

As the varsity football players took to the field to warm up for a scrimmage of their own, the rest of the fall sports teams introduced themselves. This included the boys and girls cross country teams, boys golf, girls swimming, and volleyball teams of all levels. With the introductions concluded, the varsity football teams faced off against each other for some spirited play, to the delight of both the local community and some fans from Washington who made the trip up.

Because Muscatine High School Activities and Athletic Director Mike Henson has only just stepped into his new role, he took pleasure in overseeing his initial Fall Sports Kickoff. “This will be the first Fall Sorts kickoff event held in the recently renovated stadium at Muscatine High School–always a lot of energy on this night, and that is great to see and experience,” he said.

During the 2021-2022 school year, work wrapped up on the improvements to Muscatine Community Stadium. These include previous upgrades including new entrances, ticket booths, and restrooms, a new turf field, a resurfaced track, upgraded seating, and a new press box, as well as a brand new video board installed after the conclusion of last year’s football season. Attendees got to see the video board for the first time at the Fall Sports Kickoff and got to observe it in action at the first home game of the year Friday Aug. 26.

Henson also felt exhilarated to get to see the community’s pride in its student athletes and to take part in a beloved Muscatine tradition: “It’s really an awesome thing for our students, school, and community. Anything we do that celebrates what we do here in Muscatine and brings the community together is a great thing,” he enthused. “I cannot think of a better way to start the year than the Fall Sports Kickoff!”

Lanie Weikert: The queen of journalism