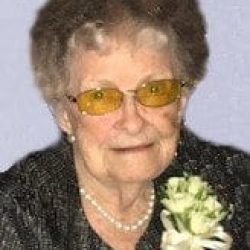 Obituary Viewed 70 times
Marcella Jean Gow, 95, passed away Saturday, November 23, 2019 at the Simpson Memorial Home in West Liberty. A celebration of life will be held in the spring. The Henderson-Barker Funeral Home in West Liberty is in charge of arrangements. Memorials may be made in her memory to the Simpson Memorial Home in West Liberty Marcella was born February 17, 1924 in Ames, Iowa the daughter of John T. and Ferne Foster Blair. She was a graduate of West Liberty High School in 1941. On June 22, 1944 Marcella was united in marriage to Lawrence B. Gow. She had been employed with Sears, served as a secretary to Roy J. Carver in Muscatine and Farmland Industries. Marcella enjoyed square dancing, quilting and painting landscape scenes. She is survived by two children: Tom (Janis) Gow of Greer, South Carolina and Cyndi (Pete) Spinden of Columbia, Tennessee. Also survived by brother Marvin Blair of West Liberty. She had 5 grandchildren and 4 great grandchildren. Preceding her in death were her husband Larry Gow, brother Jack Blair, daughter Laurie Gow, son Tim Gow and grandson Eric Gow.