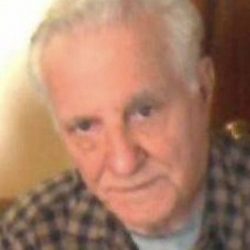 Obituary Viewed 60 times
RUDOLPH CHICK SR. MUSCATINE, Iowa – Rudolph Peter Chick Sr., 91, passed away on Saturday, November 16, 2019 at Lutheran Living Senior Campus. There will be a private burial at Greenwood Cemetery. The Ralph J. Wittich-Riley-Freers Funeral Home will be in charge of arrangements. Rudolph was born on May 19, 1928, in Shenandoah, Pennsylvania, the son of Gregorio and Anna Wachaus Cicioni. He married Frances Card on April 9, 1949, in South Waverly, Pennsylvania. She preceded him in death. He was a machinist. He was a veteran of the U.S. Marines, service in World War II. He was a member of the Moose Lodge. Rudolph enjoyed going to casinos, playing cards, and loved fishing. Those left to honor his memory include two sons, Danny Chick and wife, Peggy, of Muscatine, and Dennis Chick and wife, Cheryl, of St. Louis, Missouri; one daughter, Ann Chick-Griffin of Muscatine; 10 grandchildren; 17 great grandchildren; and 11 great great grandchildren. He was preceded in death by his parents; his wife, Frances; three sons, Rudolph Chick Jr., Richard Chick, and Terry Chick; one great granddaughter, Karlee Chick; one great grandson, Jackson Schmitt; and two sisters, Frances Rosenberry and Eleanor Coleman.