Muscatine’s Officer Pena honored at IaAWP Officer of the Year

MUSCATINE, Iowa – Two Muscatine police officers were recognized by their peers Monday (March 8, 2021) as the Iowa Association of Women Police (IaAWP) honored Whitni Pena and Jolisa Colman who went above and beyond the call of duty and saved the lives of two individuals in early 2020. 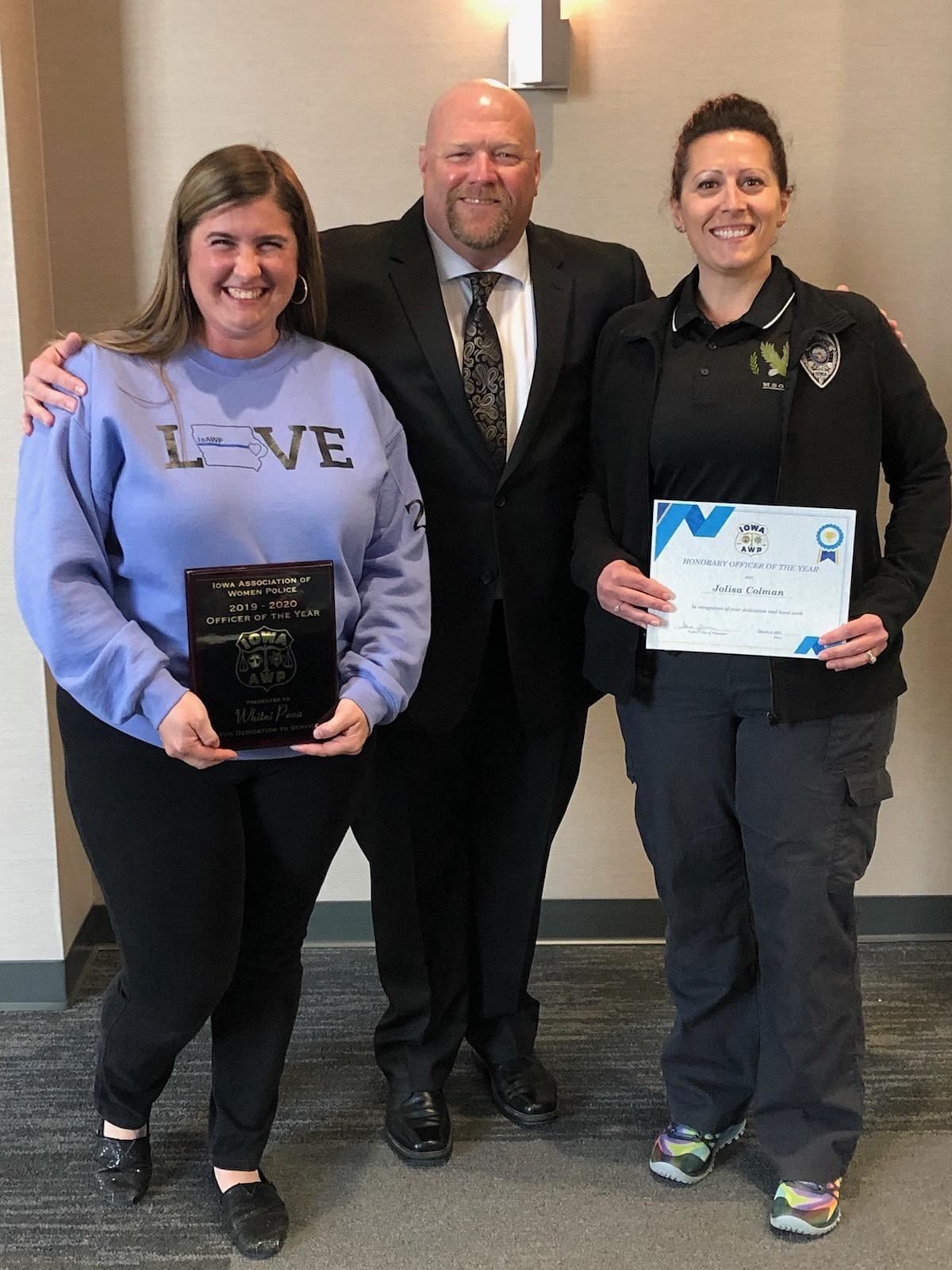 “I am very proud of these two officers,” Brett Talkington, Muscatine Police Chief, said. “They are a valuable asset not only to the department, but our community as well. Great job ladies.”

This is the second time that the two officers have been honored for going above and beyond the call of duty with acts of bravery or heroism in the face of great danger that put their own personal safety at risk. Colman was presented the Medal of Valor and Pena the Life Saving Award from the Muscatine Police Department during the May 7 Muscatine City Council meeting. Mayor Diana Broderson read the citations.

“I have been honored to present a few Life Saving Awards during my time as Chief but this is the first Medal of Valor I have presented,” Talkington said.

The IaAWP was created in 1982 and is an affiliate member of the International Association of Women Police. The IaAWP is a non-profit organization dedicated to the advancement of women in law enforcement. The organization hosts a spring training conference each year to promote this mission.

Officer Pena was recognized during the May 7, 2020, City Council virtual meeting and presented with the Lifesaving Award for saving a child’s life on February 29, 2020, while attending a birthday party in the pool area of Americ Inn.

Officer Pena was off duty attending a birthday party in the pool area at the Americ Inn on February 29, 2020, when she noticed another female pulling a child from the water in the shallow end of the pool. Officer Pena ran over to where the adult and child were.

Officer Pena noticed the child was purple, blue in the face, and was not breathing. She immediately began CPR on the child with the help of two other adults. Officer Pena performed CPR on the child for approximately four minutes. The seven-year-old boy spit out a large amount of water and began to breathe on his own.

Paramedics arrived shortly after the child began to breathe and transported the child to the Emergency Room. Officer Pena, with all her CPR training through the Police Department, saved this boy’s life by performing CPR.

The Life Saving Medal is awarded to an officer who, while acting within their scope of duties, saves the life of another person. The officer is awarded the medal in acknowledgement of his/her actions while the bar below represents the award and is worn by the officer on his/her standard uniform.

Officer Colman was recognized during the May 7, 2020, City Council virtual meeting and was presented with the Medal of Valor for saving a woman who was attempting to jump from the High Bridge into the Mississippi River on February 20, 2020. Colman’s action to save someone else’s life while putting her own life in danger warranted the presentation of the Medal of Valor, just the third Medal of Valor presented in the history of the Muscatine Police Department.

Officer Colman was on patrol February 20, 2020, when she responded to the High Bridge for a report of a female attempting to jump from the bridge. Once on scene, Officer Colman attempted to talk with the female who was sitting on the side of the bridge with her feet dangling over the ledge.

Officer Colman continued to talk with the female while she was on the beams below the ledge. The female eventually climbed her way back to the bridge, over the railing, and into safety.

The Medal of Valor is awarded to an officer who “intelligently and in the line of duty, conscious of the danger and at great risk of imminent personal harm or hazard, distinguishes him or herself by the performance of an act of gallantry and valor above and beyond the call of duty”. The officer is awarded the medal in acknowledgement of his/her actions while the bar below represents the award and is worn by the officer on his/her standard uniform.

MUSCATINE, Iowa--For their first concert of the season, the Muscatine Symphony Orchestra will enliven patrons with a compelling blend...

MUSCATINE, Iowa--For their first concert of the season, the Muscatine Symphony Orchestra will enliven patrons with a compelling blend of classic music and ingenuity....
Read more