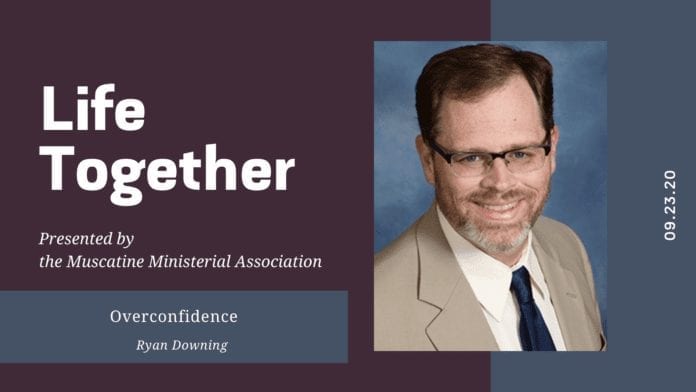 Ryan Downing
Ryan Downing has been pastor of Faith UCC since September 2016. He has a passion for exploring faith, spirituality, and the common good with others, both in and outside the church.

Because I still hold onto this idea that I can always find my way around, especially when we’re on a road trip, it has almost become something of an annual experiment to see just how overconfident I can be year after year. Of course, the only real downside to being overconfident about my internal compass is that it results in our being a little late to wherever we are going.

In other situations, however, the consequences of being excessively overconfident can be much more severe. Take for example the team who is at the top of their game and subsequently decides to not practice as hard, confident that no one will be able to catch up with them.

Or, in matters of much greater severity, just think of the Titanic. Everyone confidently believed the ship to be unsinkable, but we all know how that story ended in tragedy.

While confidence can enable and empower us to build ourselves and others up, overconfidence can just as easily bring everything crashing down around us. “Pride goes before destruction, and a haughty spirit goes before a fall,” goes the ancient proverb.

In times such the ones we are in when the pressures to choose one side or the other can sometimes become obscene (as if there are only ever two sides to every question to begin with), overconfidence can result in much more dire consequences than just wasting an hour or two on the road. Six months into a global pandemic, a little under two months out from a major election, and who knows how many days or even hours until some other challenge will come along in our own personal lives, remaining confident in our abilities to become the best and most caring people each one of us can become while also still keeping an open and humble mind, heart, and spirit is how we all make it through life’s wrong turns, icebergs, and tragedies together.

Overconfidence, however, can easily become the murky fog of arrogance that shrouds other possibilities, opportunities, answers, and experiences that we might learn and grow from. Overconfidence is what so often leads to those regretful words of hindsight, “We should have known better.” Simple open-minded confidence, however, includes having the wisdom and humility to be able to say, “I can’t do this on my own. We could all use a little help. Let’s all work together.”

This content provided by the Office of the Governor of Iowa, Kim Reynolds as a press release. Governor Reynolds announces Registered Apprenticeship Expansion...
Read more
City of Muscatine

MUSCATINE, Iowa – Girls will have the opportunity to learn the fundamentals of basketball through ball handling, shooting, and defensive techniques during the Girls Basketball...
Read more
City of Muscatine

NICHOLS, Iowa-- V&K Incorporated, the engineering firm the City of Nichols began working with in August 2019, presented their preliminary recommendations for...
Read more

I know, I know, it isn't even Halloween yet. A lot of you don't want to hear about Christmas or even Thanksgiving...
Read more

Catherine Roxana Miller (1908-2008) was a global citizen, progressive educator, and social activist. To honor her and her passion for global education,...
Read more