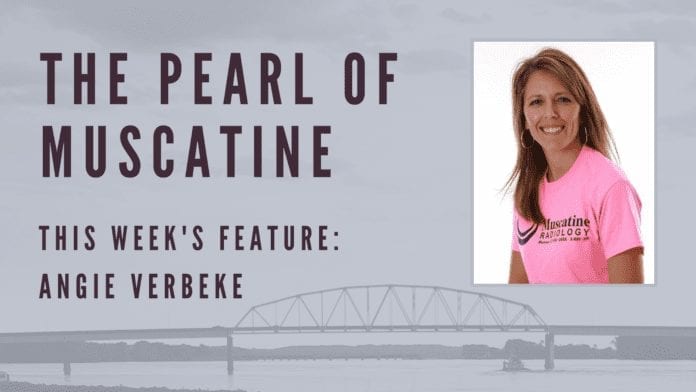 For Angie VerBeke, working as a mammographer always felt like a good fit. Growing up, she had seen her mother work as a physical therapist and her grandmother work as an operating room nurse, and she wanted to go into healthcare too. When her best friend of many years shared her positive experiences as an x-ray technician, VerBeke decided to try it too.

Shortly after completing her training, VerBeke took a job at a radiology practice in a small Missouri town. The only woman on staff, she took on the role of mammographer. She quickly grew to enjoy the work and continued with it when she moved to Muscatine, along with occasionally giving bone density scans and general x-rays. After eight years at UnityPoint Trinity Muscatine Hospital, VerBeke joined the staff of newly opened Muscatine Radiology, where both radiologists on staff had graduated from the same school she attended. She new serves as the mamography coordinator.

Over the years, VerBeke has grown very close to the patients she works with. “It’s nice to see patients each year,” she said. “They’re more like friends than patients.” VerBeke appreciates the trust they put in her and the opportunity to help them take care of their health.

VerBeke especially values helping her patients catch breast cancer in its early stages, making it less likely for them to need chemotherapy or radiation. “We can’t stop you from getting breast cancer, but we can help you detect early stage breast cancer,” she emphasized.

For VerBeke, sharing this message has taken on even greater meaning. Two years ago, she received a breast cancer diagnosis herself. Because of how early a mammogram found her cancer, she required only surgery to remove the cancerous mass and has since made a full recovery. “I like people to see you can survive breast cancer,” she shared.

For more than 20 years, VerBeke has taken care of the community. She truly loves her job and the chance she has to give back to a city she cares so much about. “I always like a small town feel when I’m out and about,” she stated. “I like the close knit community.”

CHICAGO – The Government Finance Officers Association of the United States and Canada (GFOA) recently announced that the City of Muscatine, Iowa, has received GFOA's...
Read more
City of Muscatine

MUSCATINE, Iowa - The City of Muscatine is halfway through the second round of fall leaf collection and, despite the large amount of leaves being...
Read more
Local Government and Politics