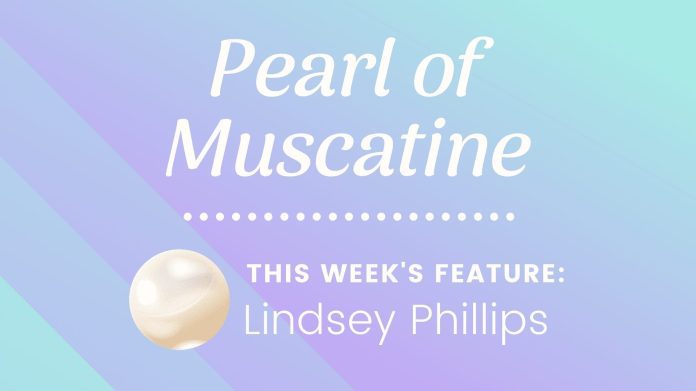 Lindsey Phillips, Director of Muscatine County Big Brothers Big Sisters (MCBBBS), discovered the perfect career for her in an unexpected way. She shared that she found out about MCBBBS through conversation at her children’s daycare. “My children went to daycare with the previous director’s kids, and I heard about it while I dropped them off.”
An in-home caseworker at the time, Phillips started hearing many good things about MCBBBS, sparking her interest in working for them. She eventually took a job with MCBBBS enrolling kids as littles and matching them with bigs. When the director position opened up, Phillips decided she felt ready to take a more active role in the organization. “When this position became available, I thought, ‘Why not? I’ll try it.’”

Now well established in her position, Phillips cherishes all the positive community connections she and the other employees of MCBBBS get to make. “We serve almost 200 kids each year. When you add in their families and the volunteers, that’s a lot of people we work with, and that’s exciting. . .. To just hear their stories, it makes you really proud of all of the outcomes that come from your dedication.”

While Philips enjoys seeing people involved with MCBBBS whenever she goes around town, she particularly values the deep, lasting, life-changing connections MCBBBS forges between littles and their bigs. “I think we have [had] littles who would say they graduated from high school because of their big or even just tried something new. . .. It speaks to the power of our mentoring.” All of the hard work Phillips puts in each week feels worth it to her because of the way it helps local children thrive.

Like all good leaders, Philips always wishes she could do more to support MCBBBS. “I don’t feel like we can ever do enough,” she said. Though every organization must deal with constraints on resources and time, Philips always does her best to meet the needs of every big and little and to have the group mentor as many children as possible.
A Muscatine resident since birth, Philips has a deep love for her community, and feels pleased that she now has the opportunity to raise her own children here. “I’ve been here my whole life, and I’m raising my family here now, so I’m probably never leaving,” she said with a chuckle.

Specifically, Philips appreciates Muscatine’s wealth of activities for everyone, especially those with kids. “Everywhere you go, there’s someone there or something to do. With two boys, there’s so much to do,” she stated.

Beyond that, Phillips also loves the way Muscatine residents work hard to identify and solve problems to make the community welcoming and supportive to everyone. “If something’s missing, people want to fill the hole, and people step up [to do it],” she added. As a part of MCBBBS, Philips herself does a lot to step up and fill these gaps, making a difference for countless children and their families.