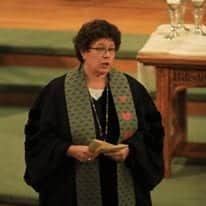 Rev. Dr. Pamela Saturnia
Rev. Dr. Pamela S. Saturnia is the Pastor of First Presbyterian Church of Muscatine. In her free time she likes to travel, watch British television, golf, and hang out with her corgi, Louis.

You see, Kay, after going to one of the games, had a great idea. She would get season tickets for her boyfriend for Christmas. She asked Jeff about the tickets, and he told Kay all about what she needed to do and how much they would cost. Jeff and Kay agreed that he would take care of getting the tickets so they could all sit together. It was such a great idea—everyone thought.

Jeff got the tickets as planned, but when it came time to pay Jeff and Marie back for the tickets, Kay made all kinds of excuses until finally she told them that she didn’t want them after all. They were just too expensive. This, as you may imagine, really put Jeff and Marie in a bind, and frankly they were angry. They were doing a favor for Kay and then she turned around and stiffed them without really saying she was sorry.

Now, they don’t do anything together—you wouldn’t even call them friends and they hardly act like neighbors. No small talk when they are out mowing their lawns or shoveling their walks. Not even a wave or a nod. All because of season tickets.

C.S. Lewis the author of the famous books the “Chronicles of Narnia” as well as many other books on the Christian life, once wrote, “We all agree that forgiveness is a beautiful idea until we have to practice it.” Practicing forgiveness is hard work. But, it is work that we are called to do as friends, neighbors, and as members of the human family.