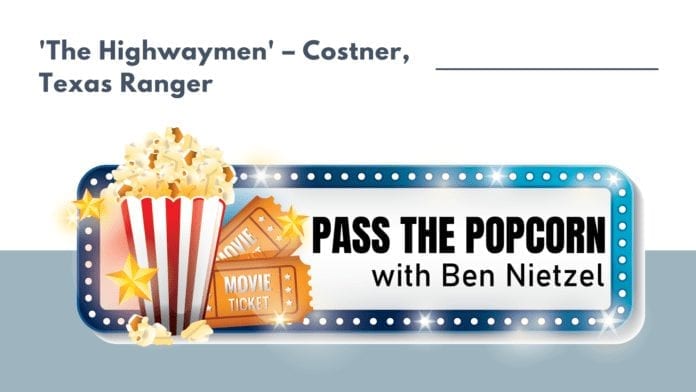 “The Highwaymen” is a 2019 Netflix release following the Texas Rangers who hunted down, and ultimately killed, the infamous outlaws Bonnie and Clyde.

In “The Highwaymen,” Kevin Costner plays former Texas Ranger Frank Hamer and Woody Harrelson plays his down-on-his-luck former partner, Maney Gault. Both men find themselves in something approximating retirement after the Governor of Texas, Ma Ferguson, disbanded the Ranger program. Older, they come out of retirement in the guise of Texas highwaymen to try to put an end to Bonnie and Clyde’s murderous crime spree.

Costner and Harrelson have outstanding chemistry together and given that it’s their marquee names that bring viewers to the film, it is no surprise that it’s the highlight of the film. Western-themed Costner is the best version of Costner, and outside of not playing catch with a baseball, he plays all his hits in the film. Harrelson plays the conscience and the lightheartedness of the duo to great effect. The film briefly touches on aging and regret, and these two have the chops to lend some gravitas to these underdeveloped themes. Kathy Bates is not in the film much as Ma Ferguson, but absolutely crushes whenever she is.

“The Highwaymen” looks and feels great. Director John Lee Hancock loving recreates depression era Texas. The cars alone could be billed as co-stars in the film. It’s also fascinating to see historical American brought to life, and the viewer can see how different, and also how similar, life was almost 100 years ago. The film is shot is slightly muted colors, and it gives the film a feeling of historical context. As one of Netflix’s early, flagship service-only movies, The Highwaymen is notable in how at home it would feel on the big screen. The costumes, the acting, and the technical work are all first class.

“The Highwaymen,” much like it’s protagonists, takes its time to get where it is going. That’s not to say it drags, but this film is about the process of capturing Bonnie and Clyde, rather than the capture itself. To be sure, that happens on film, but only after a slow build to the moment. Speaking of the infamous couple, they are intentionally pushed to the background in the film. Much like the shark in “Jaws”, Bonnie and Clyde are kept mostly off the screen, and when they do appear, they are always slightly out-of-frame. It’s an intentional choice, and it works well. Consequently, don’t expect to get much in the way of development on who they are or why people love the murderers so much. I quite enjoyed the slow build of the film, but it may not be for everyone, especially as lead after lead seems to fizzle in the pursuit.

“The Highwaymen” is a look at the men who took down Bonnie and Clyde. Costner and Harrelson are wonderful on screen together and play the old-school, “seen it all” lawmen with great aplomb. Director Hancock recreates an interesting Depression-era Texas that is fun to explore. The movie slowly builds tension as it goes, but it’s best to enjoy the ride rather than look forward to the ending. Grab some Palms Theater popcorn, your ten-gallon hat, and enjoy this movie from the comfort of your home.

MUSCATINE, Iowa – Girls will have the opportunity to learn the fundamentals of basketball through ball handling, shooting, and defensive...
Read more
City of Muscatine

I know, I know, it isn't even Halloween yet. A lot of you don't want to hear about Christmas or even Thanksgiving...
Read more

Catherine Roxana Miller (1908-2008) was a global citizen, progressive educator, and social activist. To honor her and her passion for global education,...
Read more