The problem with Shakespeare 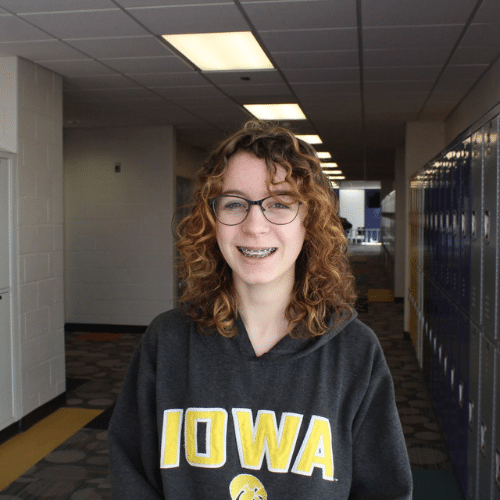 Nevaeh Davidson
Hello! I'm Nevaeh. I am a member of MHS Show Choir, a member of the Journalism program, and the Stage Manager of the MHS Drama Department.

Editor’s note: Beginning in the 2022-2023 school year, students in the Muscatine High School Journalism Two class will write a weekly column for Discover Muscatine Newspaper. As part of the course, students practice writing a variety of types of articles. Please enjoy this analysis piece from spring semester. This selection received edits for length clarity.

Shakespeare is one of the most criticized pieces of curriculum in the school system. Students and staff from around the country speak often of the Shakespeare unit. This term, frequently, has negative connotations for students. It always seems to pull memories of recording your class poorly acting out Shakespearean scenes and attempting to read mile long plays that have words like, “thou,” and, “egregious,” in them. Most students groan at the thought of him.

“I don’t like him,” said Skylar Patchtinger, a senior: “I think that he had his chance, and I respect him for taking it, but he’s old now. His words are old, and his plays are old. He’s just outdated in general, and don’t even get me started on Romeo and Juliet. It’s dumb.”

According to Patchtinger, the out-of-date language isn’t the only thing keeping students from enjoying Shakespeare’s works. Many students have other reasons for disliking his texts.

“His works are also really depressing. Why does everyone always die? Is it necessary?” she asked: “It’s predictable, and it doesn’t teach me anything besides that I’ll die someday. I knew that already.” Patchtinger continued.

The student population of Muscatine High School seemed to have two strong, overarching opinions: “I hate Shakespeare,” or, “I don’t care.” However, teachers and staff have a much wider variety of opinions on Shakespeare.

Even though some students and teachers dislike the lessons, Shakespeare is still taught consistently. It is taught by nearly 90% of high schools in the United States. So, why is this? If many dislike Shakespeare, why are we still teaching it?

Guerra has been teaching English and composition classes for seven years at MHS, and he has taught Shakespeare for all of those years.

“Don’t get me wrong, I hated it in high school,” said Guerra. “I thought it was so boring to read his work.”

Guerra, however, believes that Shakespeare is important to teach. “It’s hard and complicated,” said Guerra: “That’s why it’s so good. It’s really easy to get into books with cool titles and easy concepts, but Shakespeare’s work is much more difficult to grasp. It takes time and work to unpack it, which is a skill you need for reading more complex works.”

Guerra believes the benefits of Shakespeare outweigh the criticisms. “Plus, plays are cool. I think it’s fun to add some theater into English.”