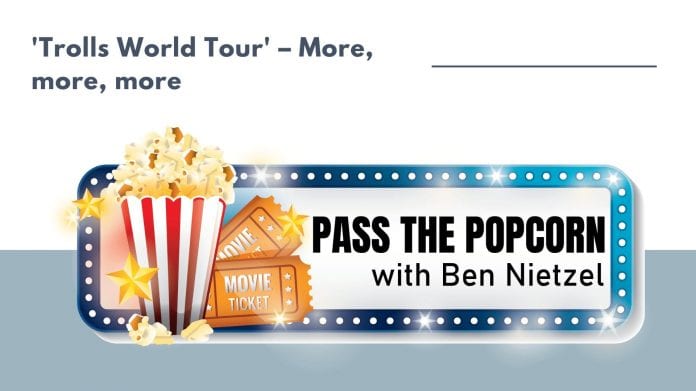 “Trolls World Tour” is the follow-up to 2016’s smash hit “Trolls”. Queen Poppy and friends discover there are other troll tribes in their world after the Hard Rock trolls make their presence and ill intentions known.

“Trolls World Tour” is an incredibly interesting movie release because it was released in a COVID-19 lock down world. With theaters closed throughout the country, many studios have chosen to postpone their blockbuster film release dates with movies like “Fast 9”, “Black Widow”, and “Wonder Woman 2” all being moved.

DreamWorks bucked this trend and released “Trolls World Tour” directly to digital on various platforms, such as Amazon and Apple T.V., for $19.99. So far, the gamble has paid off. “Trolls World Tour” has grossed nearly $100 million in three weeks of digital sales, and although these things are hard to measure, it is believed to have made more than the original did in domestic movie theaters.

Some have pointed out this may be an early death knell to theaters, but that seems premature. While “Trolls World Tour” numbers are incredibly impressive, it must be noted it was released during ideal streaming conditions. Families desperate to entertain kids trapped at home have gladly ponied up the $20 for the respite it might provide, even renting it multiple times. Add in stimulus checks with little in the way of entertainment to spend them on, and an uncrowded market as other major films move dates rather than release digitally, and it’s little wonder the movie has done so well. Its success might provide the courage for other films to try a digital release during this time, but seems unlikely to impact theaters long term.

“Trolls World Tour” is a movie of family fun. For the kids, it’s loud, bright, and full of catchy music. Throw in the characters they know and love voiced by some top-flight talent and it’s a home run. The addition of various music genre troll tribes means that kids can sing a whole gambit of tunes, and they will. For adults, the movie has plenty of “nudge nudge” humor sailing over the heads of the kids to entertain the adults. The story is nothing of note or merit, but the voice actors will find many fans among the older crowd. In fact, in some ways, it feels like “Pitch Perfect 4” at times, and that is sure to delight many.

While the whole family can certainly get some enjoyment out of the film in such drab times, the reality is that as a movie, it is not much better than fine. The story feels both well-worn and bare. The movie feels like its goal is to move to the next musical number rather than advance any kind of plot. It often felt like watching the visual representation of an old iPod going haywire. The cameos are cool and fun, but again, so much shoved at you at once, it just fails to hit the emotional story quality of its predecessor.

“Trolls World Tour” is fun for the family, especially when stuck at home looking for something to do. In that way, it’s well worth a $20 rental, especially when considering what one might spend at the theater to see it in normal times. It is fun, but just don’t expect it to be as good as the first one.

Part time employment opportunities are available with the City

Rotary gift from the heart