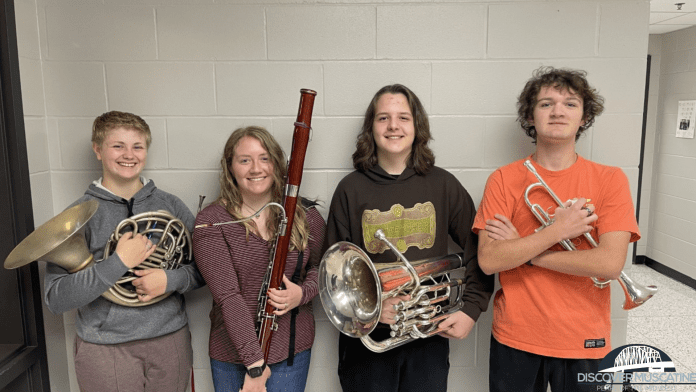 MUSCATINE, Iowa–For high school musicians, making the All-State Band represents no easy feat. Interested students must memorize and play 12 major scales, perform a one minute solo, and perform two of the three songs selected for the All-State Concert. For those willing to put in the time and effort, earning a spot in the All-State Band provides them a special opportunity to continue to develop their skills and share their talents with a wider audience. This year, two Muscatine High School seniors, Isabelle Rosin and Shelby O’Brien made the All-State Band for the fourth year in a row, a rare accomplishment. Junior Ashton Heim and sophomore Tristan Reidel may have opportunities to join them as alternates for trumpet and euphonium respectively.

A French horn player, Isabelle always looked forward to trying out for the All-State Band and the experience of going to the All-State Concert. “My mom’s a band director, so auditioning was always a given, but it’s a cool experience,” she said.

The week of the concert, students travel to Iowa State University on Thursday to get their seat assignment and attend many rehearsals before the final concert. The evening of the All-State Concert, students may enjoy a pizza dinner with their friends or go out with family members before performing along with the All-State Choir and All-State Orchestra, live in the Iowa State University Colosseum.

The concert will begin with a performance of “America the Beautiful” performed by the band and choir, several individual pieces for the band, choir, and orchestra, and end with the “Battle Hymn of the Republic,” performed by the choir and orchestra. For those whose friends or family cannot attend, Iowa Public Television records the concert and rebroadcasts it at a later date.

A place for students to spend time with other young musicians, make friends, and perform challenging music, Isabelle looks forward to returning to the All-State Band one last time. “I’m excited to get to go work with some of the best musicians in Iowa and see my friends because it’s about spending time with people with the same passion as you.”

As alternates, Ashton and Tristan will not find out until just before the start of the rehearsal period if they will get to attend. However, both of them feel proud of their accomplishments and excited that they might get to experience All-State for the first time themselves. “I’m pretty excited and I was very surprised because I was kind of on the edge of doing it,” Ashton admitted.

“I’m pretty excited,” stated Tristan, later adding he particularly looks forward, “to meeting all the talented musicians,” if he gets to go.

Though the All-State Band experience lasts for only a short time each year, it has a profound impact on young musicians. Through playing at school and participating in special events such as the All-State Band, Isabelle has found a passion for playing French horn that she hopes to take with her both as she continues her education and when she starts a career. She elaborated that after she graduates from Muscatine High School, “I’m hopefully going to Indiana University in Bloomington to study horn performance and music education.”