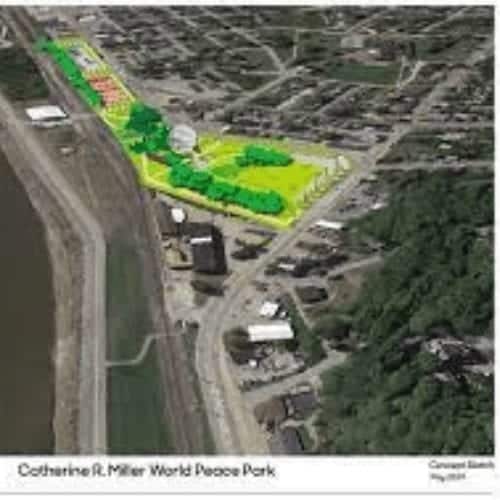 The group proposing to create a World Peace Park facing the Mississippi River south of downtown has changed its name to the World Peace Village Advisory Board to signify that it aspires to more than just another park. Now, they support a World Peace Village. The seven-acre park would form the centerpiece of a larger redevelopment for Muscatine’s South End. “We are passionate about earning the broadest possible participation and support,” stated chairperson Tom Emerick, “and that means engaging in a very careful and very public community conversation.”

The group invites interested residents to attend a one-hour question and answer session on Thursday, November 21st, from 5:30 to 6:30 pm at the second-floor meeting space in the National Pearl Button Museum @ History and Industry Center. “Starting at 5:45, we will have a short presentation including [a] display of several exciting concept drawings by Muscatine native landscape architect Matt Gordy,” Emerick said.

In October, the nonprofit advisory board adopted a mission statement expressing its aim, “to build and support a development called World Peace Village, including the World Peace Park on ground commonly known as Carver Corner, with the intent to honor local peace builders and spur economic development through tourism.” The group also established a Peace Tourism Fund at the Community Foundation of Greater Muscatine. “We are now able to welcome donations from supporters, in all amounts from as many supporters as possible.” Emerick added.