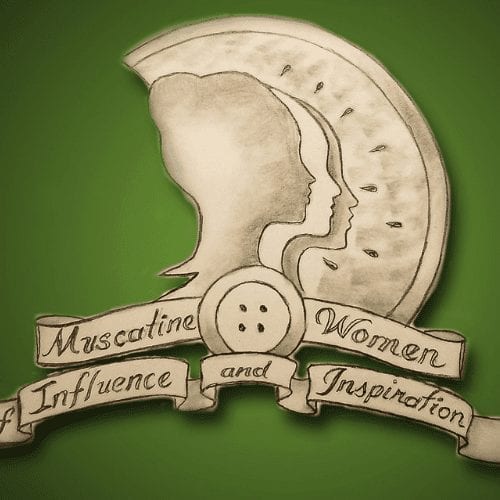 Jacque McCoy
Jacque McCoy is one of the organizers and contributors to Muscatine Women of Influence and Inspiration.

She was born Aldeen Jones on April 3, 1916, in Centerville to Schuyler and Gladiator (Gladys) Jones. Her family lineage starts with former slaves from Virginia. Many African Americans migrated north in search of greater opportunities. Towns like Buxton, Centerville, and Muchakinock–where Gladys was born–became hubs of African American life. Aldeen’s family, members of the Second Baptist Church and active in community life, prospered.

In her book “Soul: Food for Thought” Aldeen attributes her growing up in Centerville’s very diverse population of Croatians, African Americans, Jews, and Italians as preparation for weathering discrimination without becoming, “stigmatized or bitter.” Her parents taught her, “to be a happy, well-adjusted person . . . have the courage to ‘accept the things we cannot change, and the serenity and wisdom to change the things we can and to know the difference’. We must practice serving our fellow man generous portions of friendly words, understanding, time, and patience, warm personality, and a dash of humor,” (page 59). It was this character and integrity that Aldeen brought to Muscatine.

In 1948, Aldeen and her husband, William Davis, and their five small daughters came to spend the summer in Muscatine while William worked as a temporary construction worker on a contract to build the Weed Park pool. Aldeen and the girls planned to enjoy a nice summer vacation, according to her article in the book entitled “Life Narratives of African Americans in Iowa” by Charline J. Barnes. The family liked Muscatine and decided to make it their home.

Aldeen worked as a community activist until her death in 2000 and rose to local and statewide prominence. She belonged to several African-American women’s clubs. She was a charter member of the Muscatine Federated Women’s Club. As a leader in the local chapter of the National Association for the Advancement of Colored People (NAACP), she fought for civil rights. Davis served on the Muscatine Human Rights Commission and the Equity Committee of the school board. She taught a course about black history at Muscatine Community College. The African American Museum and Cultural Center of Iowa, in Cedar Rapids, has dedicated a room to her called “The Aldeen Davis Memorial Hall.”

Professionally, Davis was a dietary supervisor at a nursing home and designed workshops to train others in nursing home nutrition. She loved cooking and teaching others how to cook healthy nutritious soul food from her rich Southern tradition. She loved to express her creativity in writing and was a member of the Writers on the Avenue group. Davis participated in an inter-generational writing project which paired senior citizens with elementary school children.

Combining these two passions with her mission for advocacy, in 1978 she began writing a column on African American history and modern life for the Muscatine Journal entitled “Soul Food and Thought” which ran until 1990. “Soul: Food for Thought”, a compilation of some of her articles, was published in 1984. She wrote regularly for Common Bond-Davenport and the Iowa Bystander, long-running African American-owned newspapers. She published several articles in Prime Time, a publication for Iowa senior citizens. Upon retirement, she took up painting. Photographs of her work can be found in the Iowa Women’s Archives at the University of Iowa libraries.

She was an active member of Bethel AME Church and the New Jerusalem Full Gospel Church. She belonged to the Muscatine Garden Club and the Muscatine Herb Pals, served on the boards of Musser Public Library, the Muscatine Art Museum, the Community Y, and Hershey Manor. She was a member of Harmony Guild, Church Women United, United Ministry, Artists in Action, and organizations with emphasis on the care of the elderly. She was interviewed on an Iowa Public Television broadcast of Touchstone. She received the Governor’s Volunteer Award in 1989 and the Muscatine Rotary Club Award in 1999.

She was a kind, beautiful woman, full of wisdom and courage and with a generosity of spirit. Her impact was inter-generational; she started out being a friend to my grandmother, a mentor to my mother, and a confidant and adviser as I entered the world of community activism as a young professional woman. She was the embodiment of what it meant to live free, as she took on life and its challenges with vigor and grace. She did not allow her gender, her race, or her age to stop her from living life to the fullest and making it better for future generations.

At an overnight women’s retreat, as we all settled down for the night, many of us still had our “sleep” hair on, or kept the makeup from the day on. Aldeen, free to be herself in any circumstance, whipped off her wig showing a beautifully shaped sparsely covered head. She gave several women the courage to do the same and embrace the beauty of who they truly were. I was recently reminded of that night when, due to illness, I lost my hair. Now I proudly wear my sparsely covered head and remember my mentor, my friend, Aldeen Davis.