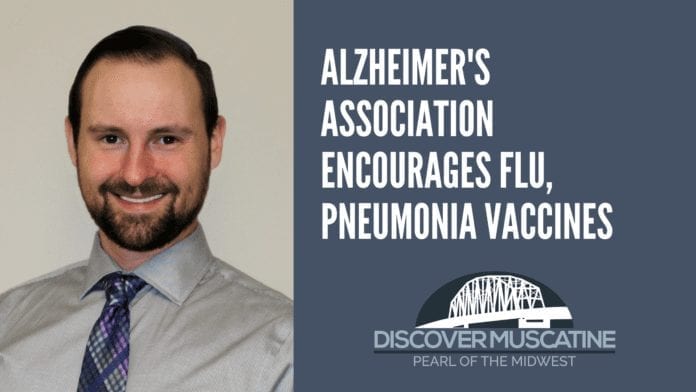 This fall, the Alzheimer’s Association has a new, and surprisingly simple recommendation for local residents interested in reducing their chances of developing Alzheimer’s or another dementia–get a flu shot and, if age 65 or older, a pneumonia vaccine.

This summer, researchers presented two studies at the Alzheimer’s Association International Conference indicating that these vaccinations could reduce the risk of developing Alzheimer’s or other dementias significantly. The first, conducted by Albert Amran at the University of Texas found that if a person had only one flu shot, especially before the age of 60, his or her chances of developing Alzheimer’s dropped by 17%. If a person had flu shots annually, that risk dropped by another 13%.

Research conducted by Svetlana Ukraintseva at Duke University found that adults between the ages of 65 and 75 who received pneumonia vaccines reduced their chances of developing Alzheimer’s by an average of 25-30%, depending on their genetic makeup. In some cases, the vaccine correlated with up to a 40% lower risk for developing Alzheimer’s.

At this time, researchers continue to work to pinpoint why these vaccines can reduce people’s risk for Alzheimer’s. “We aren’t really sure, but we think having a robust immune system is always a good thing,” stated Greg Woods, a program specialist and research champion for the Alzheimer’s Association in Iowa.

Although the full science between flu and pneumonia vaccines reducing the risk of Alzheimer’s will not emerge immediately, Woods still encourages people to act on this early promising data. “This is a relatively simple thing to prevent a disease we currently have no treatment for,” he said.

MUSCATINE, Iowa - The City of Muscatine has once again received an unmodified (“clean”) opinion according to the annual audit report for the fiscal year...
Read more

CHICAGO – The Government Finance Officers Association of the United States and Canada (GFOA) recently announced that the City of Muscatine, Iowa, has received GFOA's...
Read more