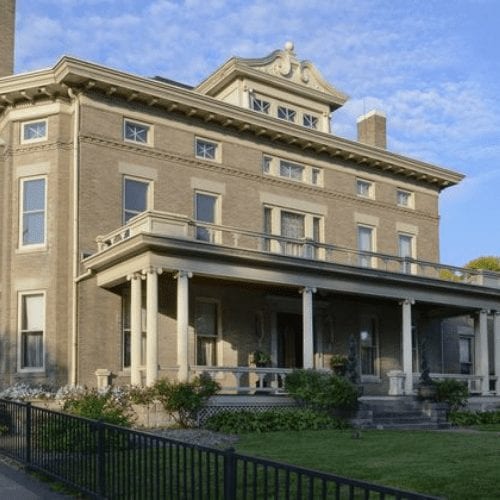 Starting on September 3rd, visitors to the Muscatine Art Center can explore two very different stories from Muscatine’s past. On the main floor of the Stanley Gallery, the exhibition, “Captivated by Japan: Laura Musser McColm & Her Era,” considers some of the factors that may have sparked Laura Musser McColm’s installation of a Japanese-style garden in 1930. On the middle floor of the Stanley Gallery, the graphic illustrations of Sean Fitzgibbon tell the story of Norman Baker, his time in Muscatine, and his cancer hospital in Eureka Springs, Arkansas.

“Both exhibitions are on view through October 23rd,” explains Muscatine Art Center Director, Melanie Alexander. “Objects from the permanent collection are featured on both floors. The top floor is a mix of home furnishings, clothing, and garden features that either were made in Japan or contain Japanese-inspired design elements. On the middle floor, a selection of artifacts from the Norman Baker collection are on view.”

The “Captivated by Japan” exhibition weaves in research by author and consultant Beth Cody who was contracted to investigate and write about the 1930 Japanese Garden. The original research project was funded by a grant from Humanities Iowa while Cody’s involvement in the exhibition was funded by a Humanities Project Grant from the Iowa Department of Cultural Affairs.

Cody’s research looked at trade with Japan in the late 1800s followed by Japan’s presence at highly-visited expositions such as the World’s Fairs. Laura Musser McColm attended both the 1893 Columbian Exposition in Chicago and the 1904 Louisiana Purchase Exposition in St. Louis. Other sources of inspiration included operas such as “The Mikado” and Madam Butterfly,” teahouses like the Japanese Room at the Hotel Muscatine, and the availability of Japanese goods for sale through traveling bazaars, catalogues, and department stores such as the McColm & Co. Store. Laura’s husband, Edwin, was President of McColm & Co. while Laura, herself, served as Treasurer and Secretary before becoming President upon the death of her husband in 1933.

“The fabrics, porcelain, and decorative objects in the exhibition capture the imagination,” states Alexander. “As we prepare to rehabilitate the Japanese Garden, it has been so important that the staff, board, and broader community revisit why there is Japanese Garden in Muscatine.”

To complement the “Captivated by Japan” exhibition, staff has arranged a loan of Kokeshi dolls from the collection of Kristin McHugh-Johnston. The dolls are on view in the showcases near the front desk. A full afternoon of programs is scheduled for Saturday, Oct. 15 starting with a look at the Kokeshi collection at 1 p.m. followed by a guided tour of the “Captivated by Japan” exhibition at 1:30 p.m. The day concludes with a Japanese Taiko Drum performance by Japan America Society of Iowa’s Soten Taiko. The performance is funded by the Mary Jo & Richard H. Stanley Human Conditions Grant.

On the middle floor of the Stanley Gallery, visitors are immersed in the strange world of Norman Baker, a Muscatine native who was an inventor, radio broadcaster, politician, and medical swindler. Baker set up a cancer hospital in Muscatine and battled the American Medical Association, along with the Federal Radio Commission. In 1933, Baker was “run out” of Iowa and set up a radio station in Mexico that broadcasted to the United States. In 1937, Baker purchased the Crescent Hotel in Eureka Springs, Arkansas.

The Crescent Hotel is the centerpiece of illustrator and author Sean Fitzgibbon’s graphic non-fiction book. Illustrations from the book are on view in the exhibition alongside Norman Baker artifacts. A closing reception is scheduled for Sunday, Oct. 23. Fitzgibbon will sign books, and copies of his book, “What Follows is True: Crescent Hotel,” are available for purchase through the Muscatine Art Center. The book signing is from 1:30 to 3:00 p.m. At 3:00 p.m., the historical short film, “Norman Baker: The Man in Purple,” will be screened in the Music Room at the Muscatine Art Center. Filmmaker Chad Bishop and producer Laura Liegois will be on hand to discuss the film.