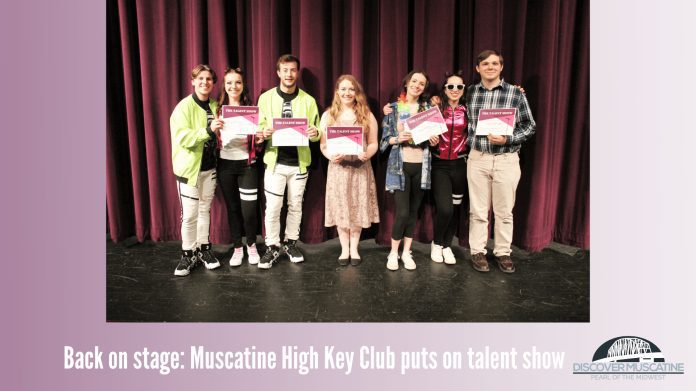 For Key Club, a student service organization, the talent show stands out as their largest event of the year. In the weeks leading up to it, Key Club Co-Presidents Paige Mathias and Kiley Randoll, both seniors, and Key Club Co-President Elect Aubrey Haney, a junior, worked tirelessly to make the event a success. With the help of their advisor, Jen Keltner, the trio held auditions, planned out the show’s order, found hosts and helped them develop a script, and arranged for volunteers to help with ticket sales, backstage management, and the sound booth.

Their efforts did not go to waste, as the show proved as popular as ever. With 12 competing entries and four exhibition performances, including a musical selection from Jazz Etc., poetry performed by teacher Scot Gehret, dueling instruments between teachers Kathleen Schippers and Derrick Zabransky, and River City Rhythm’s show choir performance, the show featured a wide variety of numbers for audience members to enjoy.

For her performance of “Jealousy” on the piano, Shelby O’Brien earned the most unique award. Jon Hight earned the crowd favorite award for his rendition of “I Wanna Talk About Me.” Ella Evans and Aubrey Moomey earned third place for singing “I Can’t Help Falling in Love with You,” Lucas Zaehringer earned second place for his original blues music composition, and Parker Ellsworth and Lilly Kallenberger won this year’s talent show with their duet of “Love is an Open Door.”

The talent show also brought in a significant amount of money as well. With more than 400 people attending, the show raised over $2,000. This year, in an effort to keep their donations in the community, Key Club will select local charities to donate the funds to once it reconvenes after spring break. “We’ve donated to national charities in the past, but we chose to do some smaller local ones so students could see their dollars at work,” Keltner explained.

Pleased that their signature event could take the stage once more, the Key Club talent show organizers felt good about how the event went. Aubrey shared she most liked, “the fun of watching everyone enjoy it,” and Paige chimed in she got the biggest kick out of, “seeing all your hard work pay off at the end and the adrenaline of everyone performing.”

Throughout the rest of the year, Key Club stays active by volunteering at parks and recreation events, such as their upcoming egg hunt, by hosting blood drives, and putting on other fundraisers, including their Crush cans for your crush fundraiser at Valentine’s Day and their candy grams around the winter holidays. They encourage all interested students to join them to make new friends and earn silver cord hours.

MUSCATINE, Iowa--On Jan. 13, members of the Muscatine Police and Fire Departments responded to a call in the 300...
Muscatine Area News

Ethnic Club: We want to be heard!