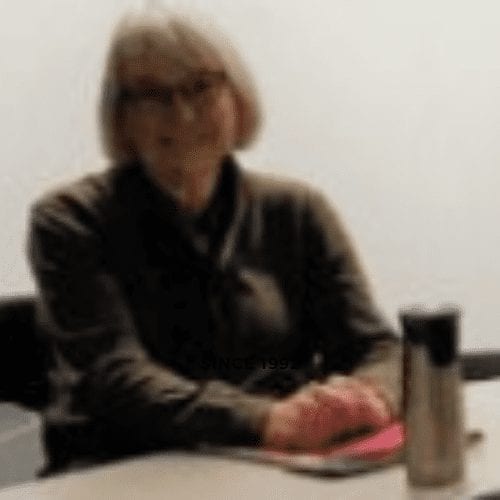 Jean Clark
Jean Clark is one of the organizers and contributors to Muscatine Women of Influence and Inspiration.

Catherine Roxana Miller (1908-2008) was a global citizen, progressive educator, and social activist. To honor her and her passion for global education, the Stanley Center on Peace and Security established the Catherine Miller Explorer Award which annually funds summer international experiences for selected Muscatine teachers.

She filled her summers with social activism and travel–whether through Quaker public health work camps in Mexico, organizing local high school Spanish students to learn from and assist residents in the local migrant camps, or traveling to world fairs and conferences. She visited over 40 countries.

In 1952-3 she was one of two teachers in the US to receive a Ford Foundation fellowship for creative teaching. She spent an entire school year traveling in South and Central America collecting experiences, contacts, and materials to share with her students. She visited 18 countries and flew in and out of 45 different airports in eight months. Imagine being the only female for several days and starry nights on a boat chugging up the Amazon River!

For years she organized an annual Pan-American Fiesta where students provided family and friends with Latin American food and entertainment. She was an early adopter of audio tape/language lab use (early 1960’s?) thanks to a grant she wrote. She held various local and state offices in education associations and professional language teacher organizations—all without a car or driving until almost 50 years old.

She was an outspoken advocate for civil rights, women’s equality, the United Nations, and peace. She wrote many letters to editors, legislators, and newsletters, and she was always circulating petitions to Congress. She organized local activities to raise awareness, and she attended state, national, and international conferences.

She was a mentor to many women and was always pushing people to learn and do more to make the world a better place for all. For years she raised money for UNICEF through holiday card sales, and she worked with migrants and refugees relocating in our community. During World War II she was trained and volunteered as a local enemy plane spotter!

Her global outlook and activism were evident in the organizations she belonged to and supported. She was a founding member of Muscatine County League of Women Voters, Muscatine Sister Cities, and Muscatine World Federalists. She also was involved in American Association of University Women, United Nations Association, Ground Zero, Beyond War, American Civil Liberties Union, Muscatine County Migrant Ministry Council, and the Musser Public Library Board. In 2004 the City of Muscatine honored her with its first ever Lifetime Humanitarian Award.

Catherine’s sense of service to community appears already in her 1928 Sheldon (Iowa) Junior College valedictorian address where she admonished her classmates: “What have we given the school? The promise of a more useful life, the promise to make the most of our possibilities in service. The indebtedness of two years here is not alone to the banker, or to the teachers–it is to the whole world, that obligation that comes of opportunity, that realization that privilege is responsibility.”

Later in that same speech she admonishes her classmates to “…go with a smile on your lips, a song and a prayer in your heart, to live well, to laugh often, to love much, to give–everything. Let us commence tonight a broader field of worthwhile being.”

Catherine Miller was the perfect example of the mantra “Think Global, Act Local.”