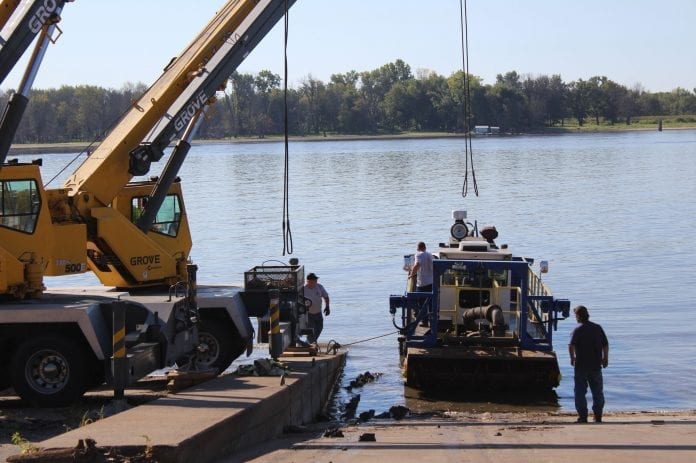 MUSCATINE, Iowa – A pair of cranes that had recently been in Cedar Rapids helping in storm cleanup efforts were in the old boat launch area of Riverside Park Friday (Aug. 21), lifting the City of Muscatine dredge into the Mississippi River. The dredge will spend the next two or more weeks removing Mississippi River sediment from the Muscatine Boat Harbor and Marina.

“We were not able to dredge the harbor a year ago because the river was in flood stage for an extended period of time,” Jon Koch, director of the Water and Resource Recovery Facility (WRRF), said. “We were wanting to launch the dredge earlier but had to wait on the cranes.”

The Mississippi River is currently at 7.6 feet and will remain steady or fall slightly over the next seven days.

Jim Allen, WRRF Biosolids & High Strength Waste (HSW) lead worker, has been in charge of preparing the dredge for operations this summer and will operate the dredge with other staff from the Biosolids/HSW Division.

“Jim has done an extraordinary job of getting the dredge ready for operation while also leading our Biosolids/HSW Division that includes the Muscatine Organics Recycling Center (MORC),” Koch said. “He has a lot of new staff that will be trained in dredge operations over the course of the next several weeks.”

The dredge was scheduled to begin operations at the mouth of the harbor Friday afternoon.

The WRRF runs the dredging operations for the harbor annually or as needed. Solids coming from the river fill the entrance and other areas of the harbor making it difficult for boats to enter or exit. Once the material is removed, the dredged spoils are pumped along the riverfront in underground piping to large bags at the old Hawkeye Lumber site now owned by the City of Muscatine.

These bags are 150 feet long, 45 feet around, and are made of a special material that allows for the water to weep out yet contain the dredged material. Once the spoils have dried, Public Works staff removes the material for use as fill dirt.

Eight bags are used so that four bags can be filling while four are draining making the operation more efficient and cutting time spent on dredging operations in half. The City recently purchased 10 new geo-synthetic bags for the harbor dredging operations. Bags not used in the harbor operations will be used when the old anaerobic digesters at the WRRF are cleaned as part of the Digester Rehabilitation Project.

Recent repairs to the transient dock in the harbor will aid in the dredging operations.

The transient dock was damaged during the 2019 Mississippi River flood and was one of several repair projects from flood damage that was approved by the Federal Emergency Management Association (FEMA). The transient dock can now be moved, when needed, and is currently tied up upriver in the harbor at the old bridge pier to allow for dredging operations.

A video of the launch is available at: DREDGE LAUNCH.

This content provided by the Office of the Governor of Iowa, Kim Reynolds as a press release. Gov....
Read more
Local Government and Politics

This content provided by the Office of the Governor of Iowa, Kim Reynolds as a press release. Today, Gov. Kim Reynolds released the...
Read more
Muscatine Area News

Eulenspiegel holds drive in show in lieu of annual festival

WEST LIBERTY, Iowa--In September, children in West Liberty have looked forward not only to the beginning of a new school year and...
Read more
Muscatine Area News

This content provided by the Office of the Governor of Iowa, Kim Reynolds as a press release. Gov. Kim Reynolds ordered all state...
Read more

This content provided by the Office of the Governor of Iowa, Kim Reynolds as a press release. Today, Gov. Kim Reynolds released the...
Read more

Eulenspiegel holds drive in show in lieu of annual festival

WEST LIBERTY, Iowa--In September, children in West Liberty have looked forward not only to the beginning of a new school year and...
Read more