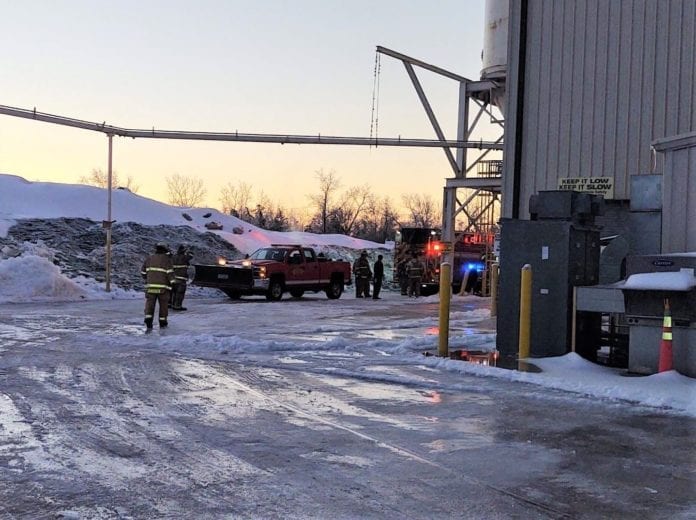 MUSCATINE, Iowa – It was a cold start to the morning for members of the Muscatine Fire Department who quickly extinguished a fire in an industrial building today (Jan. 5, 2021).

The Muscatine Joint Communications Center (MUSCOM) received a 911 call at 5:24 a.m. Tuesday of a fire at 4907 55th Avenue West. The building involved is an industrial building that recycles glass.

Upon arrival crews found smoke coming from the upper floor of the building and all occupants already evacuated. The fire was found inside machinery and was contained to the machines and related ductwork. The total initial loss estimate is $30,000. Due to the location of the fire and the need to remove access panels it took about an hour to bring the fire under control.

The on scene investigation was completed and the initial cause was listed as accidental. The area outside the building was covered with extensive ice buildup due to the recent storm.

There were no injuries to any responders or occupants. An estimated 18 fire fighters including off duty staff responded and automatic mutual aid assistance from the Fruitland Fire Department. The Muscatine Police Department provided support as well.

About the Muscatine Fire Department:

MUSCATINE, Iowa – The final pieces to the puzzle of the City of Muscatine Fiscal Year 2021-2022 Budget were being put together Wednesday (Jan. 27,...
Read more

MUSCATINE, Iowa – Three men have been charged following a report of gunshots being fired in the 1200 block of Nebraska Street on January 10,...
Read more

MUSCATINE, Iowa-- On Jan. 26, the Muscatine Police Department arrested two suspects and issued a warrant for a third in a shots fired incident...
Read more