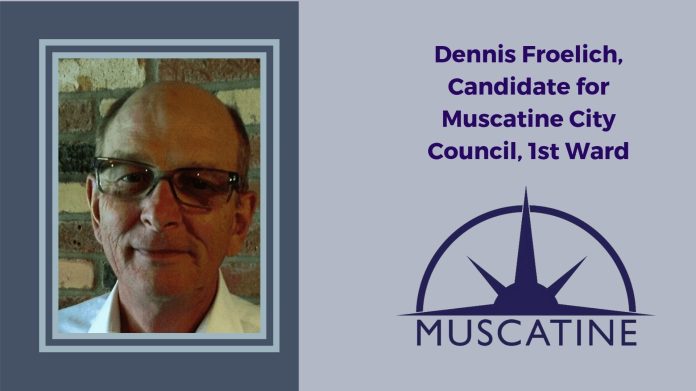 Muscatine has long been a city that has had good local government, provided good jobs, good city services, and many opportunities for its citizens. Froelich feels that there is still room for future businesses to locate in Muscatine, and room for expansion of businesses already here, which will provide additional good paying jobs. It is imperative to promote local growth, maintain solid fiscal responsibilities, and then to get citizens involved in the community, whether through volunteerism, local government programs, non-profit organizations, churches, or any other civic event that will enhance Muscatine.

Froelich believes it is important to support our Chamber of Commerce and Industry, as well as the Muscatine Convention and Visitors Bureau, as these are key to developing new business opportunities. New business is welcome in Muscatine. There are helpful programs that support new businesses, as well as available buildings throughout the city.

Prior to moving to Muscatine over forty years ago, Froelich attended the University of Minnesota, majoring in secondary education. After college, he worked in both manufacturing and sales. He is a past member of the Chamber of Commerce, Jaycees, and was Civil Defense Director for Big Stone County in Minnesota. He is a veteran, serving seven years in the Minnesota Army National Guard, attaining the rank of First Lieutenant.

Since moving to Muscatine, he worked as a plant operations and production manager until his retirement. After retirement, he and his wife owned and operated a small business in Muscatine. Froelich has been involved in the Muscatine Chamber of Commerce, Downtown Action Alliance, Scouting, and was a past President of the St. Mathias Church Council, along with many other church related positions.