Halloween at a home away from home 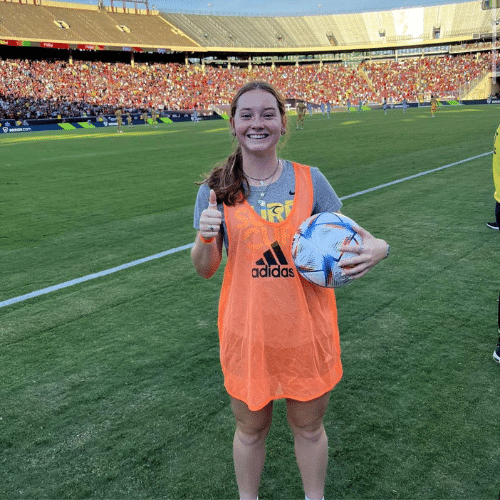 Lanie Weikert
Lanie Weikert, editor of the Auroran Today, is a senior at MHS, and this is her second year on the staff. Outside of the Auroran, she spends most of her time playing soccer, traveling, hanging out outside, and spending time with family.

In August of this year, two students from two different countries traveled to the small town of Muscatine to prepare for their foreign exchange year at Muscatine High School.

The high school experience in America is nothing like the movie “High School Musical,” but the spirit within American high schools is something that differs from foreign schools.

Madalena Gomes, one of the foreign exchange students from Portugal said: “my favorite part about the United States so far has been the cross country team. From team dinners to meets, the environment that has been created is something that I have never been a part of before.”

On the other hand, another exchange student, Anna Finiuc from Moldova, has not had the opportunity to compete in a high school sport yet, so she has spent her time adjusting to the American lifestyle and channeling her inner Muskie spirit.

She said, “everyone is very friendly or at least tries–I like the school spirit and how all of the students come together to support the football team.”

Not only do the schools in their home countries not have school sports, but they have never experienced Halloween in the way we celebrate in America.

Anna said: “we don’t celebrate Halloween in Moldova. Many people think it is an evil holiday, so they try to stay away from it as much as possible and not pressure kids into celebrating it either.”

However, her home country’s beliefs will not stop her from participating in some Halloween activities this year with her host family. “I’m going to a corn maze in Des Moines with other foreign exchange students and Americans,” Anna continued, “then I am going to Wisconsin to trick or treat with my host grandparents.”

In Madalena’s home country of Portugal, the Portuguese don’t take Halloween as seriously as Americans tend to. They hold off their celebration till the spring for Carnaval, right before Lent. The annual event includes music, food, and parties, kind of like Mardi Gras in the United States.

Within the past few months in the United States, Anna and Madalena have spent their time transitioning from European to American culture.

Madalena said: “I think the weirdest thing I have had to adjust to so far has been the dinner time. Back home we usually eat around 8 o’clock, or even later, but here, I am eating dinner around five or sometimes earlier. In Portugal, most restaurants don’t even open until 7 p.m. for dinner. Also, tipping the waiter is not a part of the culture, a shared trait throughout Europe.”

Madalena added, “I get super nervous when I go to restaurants and have to tip, because we don’t have a tipping system in Portugal. Not because I am nervous to tip people, I am just not used to it.”

Adjusting to the American lifestyle hasn’t been sunshine and rainbows for the two, but they seem to be finding their places in the school and fitting right in. Even though they have not celebrated the holiday before, Anna and Madalena are embracing Halloween while maybe even creating their own traditions at the same time.