In Need of Radical Change 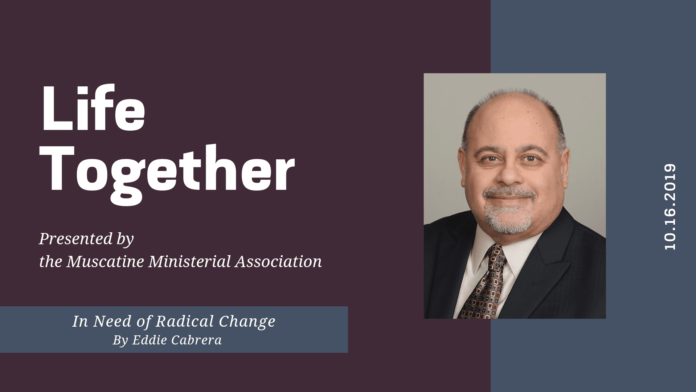 When I first saw a picture of Aron Ralston, I didn’t notice that his right hand had one of those prosthesis claws, but once I read his story, I did a doubletake.

Aron was hiking in a canyon in Utah. No one knew he was out there. He was hiking alone when a boulder dislodged and pinned him down. Can you imagine? A boulder isn’t something you just push aside.

All he had was a dull pocketknife. Obviously, you can’t get much leverage out of a pocketknife, so what was Aron going to do? He realized this was a matter of life and death, because no one was ever going to find him there, so he went to work. By the time he was done, he was minus an arm from just below the elbow. It was a radical decision, but he got out of there with his life.

What sort of radical decision do you need to make to save your life? You might be thinking, “What do you mean? That’s an insane thing to write. Everything is fine. I don’t need to change.”

Maybe life is going well for you, but maybe it isn’t. Could it be that you are trapped by addiction to something that is harming you and your loved ones? Aron knew he had to do something radical to save his life or he would die. Perhaps you are very aware that you need to do whatever it takes—make an appointment to see the doctor or talk to a friend and come clean.

Jesus said this, “If your right eye causes you to sin, pluck it out and cast it from you. . . . And if your right hand causes you to sin, cut it off and cast it from you.” Jesus wasn’t talking about your literal eye or right hand. He was talking about whatever it might be that is causing you to think or do what is wrong and harmful. He said to get rid of it because it will rob you of life.

My own life was headed in the wrong direction. I was trapped in a lifestyle that was leading me into dangerous territory. There were habits that had to go. How I got out of it was a real miracle of God.

Just give it some thought. If it makes sense and speaks to you, do what it takes to live!

MUSCATINE, Iowa – The intersection of Cedar and Houser Streets will be closed for three weeks starting Monday, March 30, as the City of Muscatine Full De

I love the way Jesus answered questions. He always seemed to get to the heart of the matter, or he had a...
Read more

Yesterday I received a text from a young woman I baptized several years ago. She asked, “I was wondering if you had...
Read more

In the past few days, it’s become almost impossible to keep up to date on the most recent news of the now...
Read more

In Ireland, just outside of Dublin, there is a place called Monasterboice that is home to a number of High Crosses. ...
Read more