It’s How You Play the Game 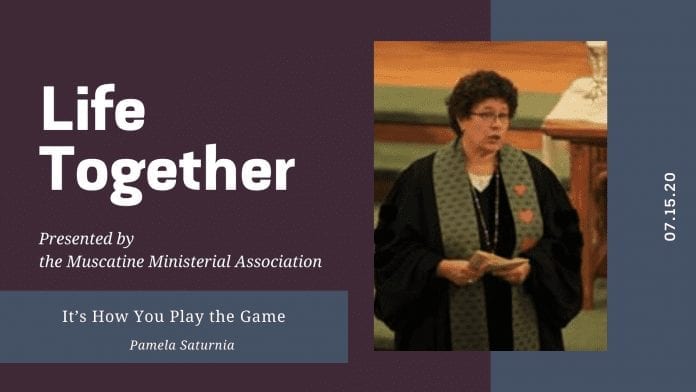 Pamela Saturnia
Rev. Dr. Pamela S. Saturnia is the Pastor of First Presbyterian Church of Muscatine. In her free time she likes to travel, watch British television, golf, and hang out with her corgi, Louis.

You have heard the adage, “It’s not whether you win or lose, it’s how you play the game.” In December of 2012, there was a long distance race in Spain where Abel Mutai, a Kenyan runner who had just won a bronze medal in the London Olympics, was clearly going to win, until he got mixed up and stopped running just before the finish line. Abel got confused because he couldn’t read the signs because they were in Spanish. This was a lucky break for the second place runner, Ivan Fernandez of Spain, except that Ivan didn’t race ahead to the finish line. He slowed down and pointed Abel to the finish line and ended up pushing him in the right direction. They finished with Mutai in first place and Fernandez in second place.

A journalist asked Ivan, “Why did you do that?”

Ivan replied, “My dream is that someday we can have a kind of community life.”

The journalist insisted, “But why did you let the Kenyan win?”

Ivan replied, “I didn’t let him win, he was going to win.”

The journalist insisted again, “But you could have won!”

It’s not whether you win or lose, it’s how you play the game.

Ivan Fernandez said, “My dream is that someday we can have a kind of community life.” His dream of living in community with others is bigger than his need to win. I like to think that the citizens of Muscatine have a similar dream to have a strong community life. Our town has so much going for it. We take care of one another. We make sure that the least of these are fed and housed and clothed. We have things to do for people of all ages. Muscatine is made up of generous and giving people.

So, I am going to ask you, my friends and neighbors, to do one more thing for one another. Wear a mask when you are out in public. I know we are all tired of dealing with COVID-19. I know it’s not the most comfortable thing, but the pandemic isn’t over. It’s affecting more people in our county, as the numbers indicate.

Let’s channel our inner Ivan Fernandez and think not about our individual rights and freedoms, but think about what’s best for everyone in the community. Even if that means putting someone else first. And that means wearing a mask in public.

Part time employment opportunities are available with the City

Rotary gift from the heart