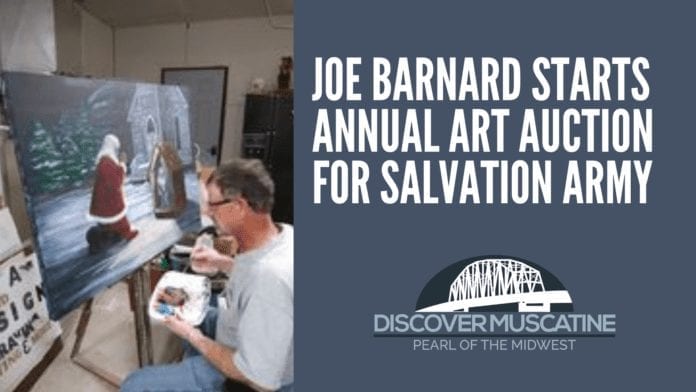 MUSCATINE, Iowa–A lifelong artist, Joe Barnard felt the time had come for him to use his talents to benefit the Salvation Army of Muscatine County: “I am very grateful for this gift in the arts, and 2020 has been a really tough year for many folks. If I can help raise a little money to help others that is what I’m supposed to do! I wanted to help here locally and give back to our community.”

Focused on this goal, Barnard held an online auction for several pieces of his work. These included an etching done on a stone topped table, a cross shaped necklace pendant carved out of a shell and inlayed with an sapphire stone, and a pencil drawing of an American Bald Eagle. Through Facebook, Barnard accepted bids for each item, which together raised $475 dollars for the Salvation Army, which will go to their Red Kettle Campaign to assist in running their programs and filling their food pantry for the year ahead.

Though Barnard has only just started using his work to fundraise for local causes, he already has quite a following, both in Muscatine and beyond. As a child growing up in Ardon, Barnard discovered his love for art. Especially inspired by the skills of his mother, Dee, and brother, John, he worked hard to develop his talent. In high school, he took art classes from Dan Kitchen and continued his studies under the direction of Mary Alice Sessler at Muscatine Community College. One winter, Sessler introduced him to a portrait artist working out of the Muscatine Mall. The artist saw promise in Barnard’s work and invited him to work with him, which he did for three holiday seasons. To this day, Barnard stays in touch with Kitchen and Sessler and continues to draw inspiration from them.

More recently, Barnard carved one of the sculptures on display at the Merrill Hotel. Last year, he earned fifth in his division in the American Art Competition, which included entries from 67 different countries. Barnard also sells art worldwide.

If you would like to see more of Barnard’s art, including his annual Christmas paintings, and stay up to date on what he plans to auction off next year, he encourages you to visit his Facebook page, Joe Barnards Art. He also uses his page to give away prints from time to time and to preview new works in progress.

MUSCATINE, Iowa – The final pieces to the puzzle of the City of Muscatine Fiscal Year 2021-2022 Budget were being put together Wednesday (Jan. 27,...
Read more

MUSCATINE, Iowa – Three men have been charged following a report of gunshots being fired in the 1200 block of Nebraska Street on January 10,...
Read more

CEDAR RAPIDS, Iowa– During Black History Month in February, the Alzheimer’s Association is recognizing the contributions from Black individuals making a difference in the...
Read more