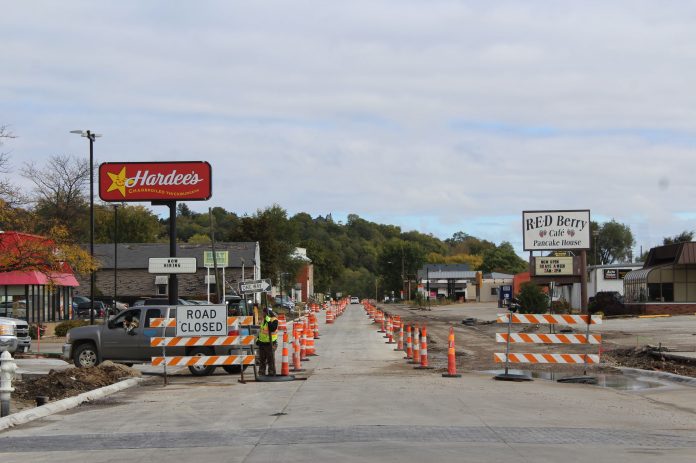 The Grateful Column: The Weigand Effect

MUSCATINE, Iowa – Two major road projects have or will see changes to traffic configurations this week, and, with one, that means the end of the project.

The Park Avenue 4-to-3 Lane Conversion Project is anticipated to be completed this week when stripping and the activation of the traffic signals wraps up. The Grandview Avenue project is nearing the end of the first year of the two-year project with work concentrated from Pearl to Musser.

Drivers who use the new detour route from Oregon to Pearl are reminded to drive slowly and remain alert as it remains a construction zone and a hazardous travel area. Fines are doubled in construction areas with the speed limit set at 25 mph.

Heuer Construction, Inc., is beginning to prepare the portion of Grandview from the railroad crossing to Musser for paving as early as later this week. This section of Grandview remains open to northbound traffic but drivers can expect delays due to the construction work. The contractor recommends through traffic take Sampson to Stewart Road to Oregon to Grandview to bypass this section of the project.

The contractor also anticipates beginning to prepare the riverside portion of Grandview Avenue from Oregon to Pearl for paving as early as later this week, and will do so block by block starting at Pearl to maintain access to businesses on the river side of Grandview.

Prepping for and paving of this phase of the Grandview Avenue Reconstruction Project is weather dependent.

The Park Avenue 4-to-3 Lane Conversion Project is in its final stages with work being completed in the northbound lane. Stripping is expected to begin on Tuesday or Wednesday with the center lane closed to traffic. Signal activation will follow the completion of the permanent stripping.

Once completed, Park Avenue will be three lanes from Colorado-Clay to Cypress Street. The center lane will be for left turn only. To learn more about 4- to 3-lane conversion and the rules for driving on a three-lane street, visit the Iowa DOT page on 4- TO 3-LANE CONVERSION.

All work to complete the Park Avenue Project is weather dependent and may delay the full opening of the street.

MUSCATINE, Iowa—Though the Salvation Army of Muscatine County does important work for the community throughout the year, they set...
Muscatine Area News