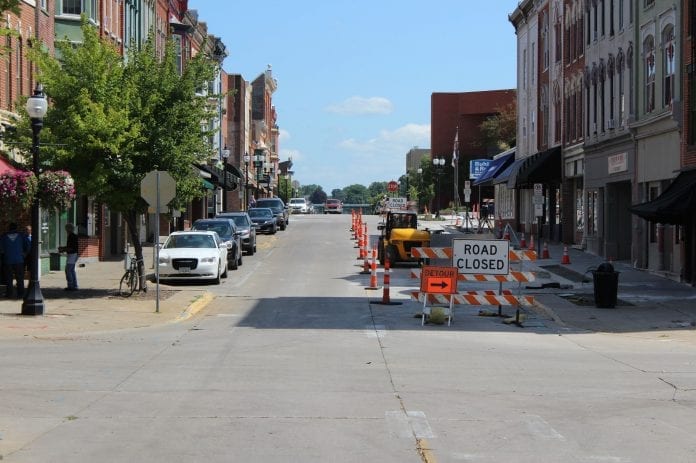 Curb and gutter replacement work along with replacement of sidewalk on the south side of the 200 block of East 2nd Street that has had the eastbound lane closed since July 28 is wrapping up with brickwork yet to be completed.

KE Flatwork, Inc., the prime contractor for the project, anticipates switching lane closures from the eastbound lane to the westbound lane on Monday. Westbound traffic on 2nd Street will be detoured from 2nd Street onto Cedar Street, to 3rd Street, to Sycamore Street, and back to 2nd Street. Traffic will be permitted eastbound through the construction area.

The second stage of the six stage 2nd Street Streetscape Project began Tuesday, July 28, in the 200 block of East 2nd Street. The final five stages of the Streetscape Project will include replacing the curb, gutter, and sidewalks on both sides of the street along with some full depth patching in the driving lanes from Cedar to Pine and from Walnut to the Roundabout.

The second stage also includes the reconstruction of the intersection of 2nd and Sycamore streets to match the work completed at the 2nd and Cedar intersection. The intersection work is tentatively scheduled to begin after sidewalk replacement in the 200 block of East 2nd Street is completed.

The construction contract does not allow project work to continue past October 1 in each year of the two-year project, and work on the Sycamore Street and 2nd Street intersection may be postponed until the start of the 2021 construction season. The contractor indicated that, depending on available time, replacement of the curb, gutter, and sidewalks in the 100 block of East 2nd Street may occur before the intersection work.

All dates are tentative and dependent on weather conditions or other unforeseen circumstances.

Drivers are urged to use caution when proceeding in or around construction areas and to find alternate routes of travel when possible.