Learn a Lesson from the Cuckoo Bird 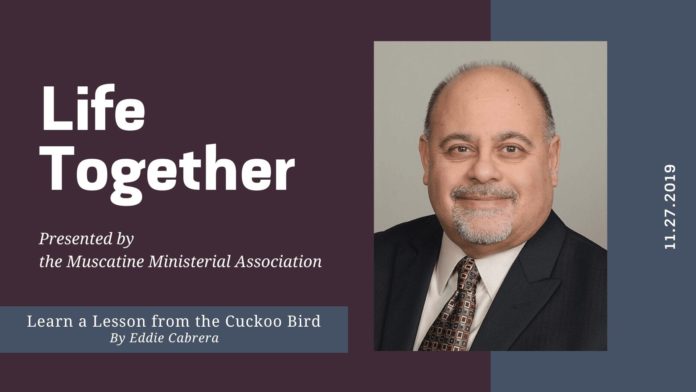 We all face temptation in life. So, how do we deal with it? Learn a lesson from, of all creatures, the cuckoo bird. Hear me out.

What’s interesting about this bird is that it never builds its own nest. When momma bird feels an egg coming on, she finds an unguarded nest with eggs. The cuckoo lands hurriedly, lays its egg, and takes off again. That’s all the cuckoo does in terms of parenting.

Let’s say it’s a thrush whose nest has been invaded. Being mathematically challenged, momma thrush fails to notice the extra egg. Four little thrushes and one large cuckoo eventually hatch, but the cuckoo is two or three times the size of the thrushes.

Momma, having hatched the five little birds, goes off early in the morning to get the worm. She comes back, circles the nest to see four little thrush mouths and one cavernous cuckoo mouth. Who gets the worm? The cuckoo.

So, the cuckoo gets bigger and bigger and the thrushes get smaller and smaller. To find a baby cuckoo in a nest, simply look for little dead thrushes on the ground. The cuckoo pushes them out as they die. The adult thrush keeps feeding the baby cuckoo even though it is three times as big as the thrush.

What does this have to do with temptation? You and I have two natures in one nest. The nature you feed will grow, and the nature you starve will die. It’s just that simple, and yes, it’s how it works in spiritual matters of the heart, mind, and body.

So, you want to feed your God-given spiritual nature and starve the carnal nature? Here’s what the Bible says, “Submit to God” (James 4:7; 1 Peter 5:8). It isn’t by guts and determination. It isn’t by the sweat of your brow or self-discipline. Those efforts will only get you so far. When you submit to God, you are surrendering to a power greater than anything you can muster. This is what brings you true and lasting success against the urge to give in to temptations and their harmful results.

The illustration of the cuckoo bird comes from Caught Between Two Worlds by Karl Haffner, pages 86-87.

MUSCATINE, Iowa – The intersection of Cedar and Houser Streets will be closed for three weeks starting Monday, March 30, as the City of Muscatine Full De

When we think of heroes, we often think of celebrities or those faced with a split-second decision that saves a life; but...
Read more

We’re All in This Together

If you’re on Facebook, I strongly encourage you join the “Spreading Joy (Quarantine) Walks-Muscatine” group. To date (as of writing this on...
Read more

Board of Supervisors allocate $20,000 to Special Olympics