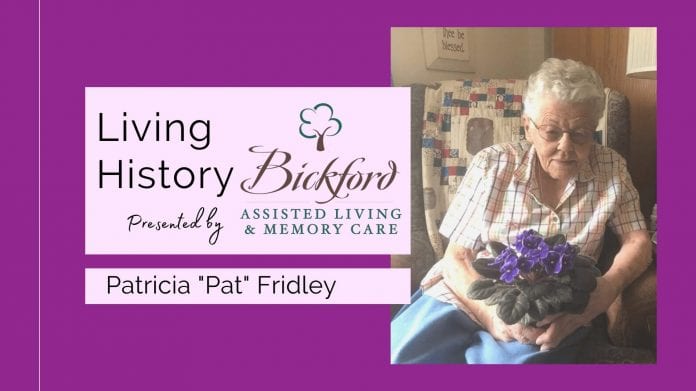 Born at Hershey Hospital on Mulberry Street, Patricia “Pat” Fridley has lived her whole life in Muscatine County. She attended Muscatine High School and worked at Montgomery Ward’s in downtown Muscatine. After graduating in 1947, Fridley married her husband, Bud Fridley, and the two moved to a farm just outside of Nichols.

Growing up during World War II, Fridley remembers both the privations and patriotism of the time. Despite rations and long lines to get basic supplies, such as stockings, she recalls Muscatine residents coming together to do what they must to support the war effort without complaint.

For Fridley, life on a farm had some surprises. “It took some getting used to, a city girl in the country,” she said. “We didn’t have running water or an indoor bathroom, so there was a definite adjustment to moving out there.” Fridley came to enjoy farm life, and she and her husband lived on theirs for 67 years, raising four children, two daughters and two sons, while there.

A dedicated volunteer, Fridley and her husband put a lot of effort into building First Baptist Church in Muscatine. Fridley also shared her time with others by teaching Sunday school and leading Pike Township’s 4-H club.

A longtime volunteer at the Muscatine Care Center, Fridley fondly remembers helping with many fish frys and pancake breakfasts, and taking residents on outings. Once, Fridley and several residents took a trip to Amana, but their vehicle broke down on the way. Despite having to deal with towing and trying to get wheelchairs into smaller cars, she reported that everyone had a wonderful day anyway.

Fridley has always enjoyed living in Muscatine County because of the closeness and kindness of the people who live here. Since moving to Bickford in 2014 (she and her husband had planned to spend their winter there and decided to stay permanently) she has also enjoyed becoming a part of the Bickford community. She found them especially supportive after the passing of her husband eleven months after they moved in. “Oh sure it’s had its rough patches, but the girls are so good and compassionate and everyone does great–I have no regrets about staying at Bickford.”

Growing up in Muscatine in a large family of 13 children, Cheryl Plank has deep roots in the community. Her desire to...
Read more

“You’re finally a Muskie, Dad!” declared my son Henry as I prepared to start my new job as Director of Communications and...
Read more

At the first sight of orange or yellow in the tip top of my backyard tree, the craving for all things pumpkin...
Read more