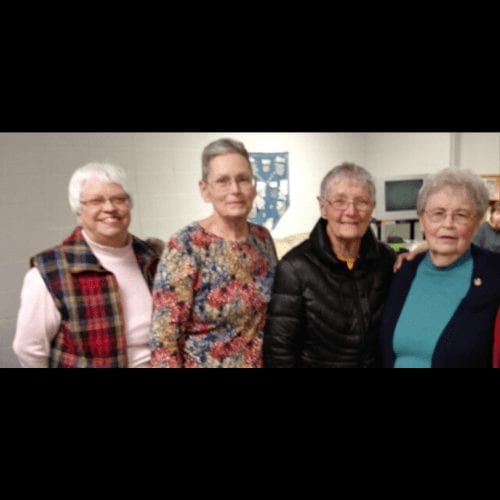 Muscatine Brain Injury Support Group
Local Pilot Club members formed the Muscatine support group, and several of its members still oversee its ongoing activities. Usually, a dozen or so people attend the monthly meetings. The Muscatine Pilot Club chapter has, among its objectives, the mission of assisting men and women with bran injury to lead fuller, more productive lives and to reduce the incidence of brain injury. The group addresses the issues of traumatic injuries caused by accidents and traumas, as well as acquired injuries that result from strokes and other forms of illness.

MUSCATINE, Iowa—Every month, a group of people who have experienced brain injuries meets in the Fellowship Hall of Our Savior Lutheran Church on Lucas Street in Muscatine to seek ways they can help each other deal with the consequences of brain injuries caused by traumas, strokes, tumors, or other medical conditions.

The meetings begin with attendees giving updates on their experiences in the previous month, discussing their triumphs and troubles. Attendees who experienced brain injury focus on the ways they solve the puzzles of living with brain injury. Relatives and companions of people who have sustained brain injuries also attend the meetings. They recount the events of the month from their own perspective. Anyone who has or lives with someone who has a brain injury may join.

“You know, the brain consumes enormous amounts of energy in the course of a day,” said Diane Orr-Kelly: “When a human brain is injured, the amount of mental energy it takes to walk, talk, or perform even simple tasks increases exponentially. We just wear out faster every day. That’s the big challenge most of us face, and it doesn’t go away. We deal with that for the rest of our lives.”

Orr-Kelly, a Muscatine native and founding member of the Muscatine Brain Injury Support Group, received a disabling severe traumatic brain injury from a motor vehicle accident in January 2000. Her car was rear-ended by a semi-tractor trailer truck which was traveling at high speed.

Several years of rehabilitation, therapy, intensive effort, and the help of doctors, nurses, friends, and family enabled her to recover her ability to speak, walk, perform ordinary tasks, and eventually, regain most organizational and executive functions. Her short-term memory and balance remain damaged, but she can function normally within society with few, if any, noticeable symptoms.

Orr-Kelly’s family encouraged her to join the Muscatine chapter of the Pilot Club, an international organization of professional women with a mission to influence positive change in communities throughout the world. The Muscatine Pilot Club chapter has, among its objectives, the mission of assisting men and women with bran injury to lead fuller, more productive lives and to reduce the incidence of brain injury. The group addresses the issues of traumatic injuries caused by accidents and traumas, as well as acquired injuries that result from strokes and other forms of illness.

Local Pilot Club members formed the Muscatine support group, and several of its members still oversee its ongoing activities. Usually, a dozen or so people attend the monthly meetings.

“Brain injury is a silent epidemic,” said Irene Lary, a Pilot Club Member who was instrumental in starting the group. You can’t see the injury and there’s no universal characteristic of a brain injury, but they can rob a person of much of life’s joys.”
She explained that people who have strokes and traumatic brain injuries are often isolated from many social and family events because noise and simultaneous conversations can prove painful to endure. Lary said brain injuries are often invisible, yet totally disabling, and they limit employment opportunities.

“So, you often experience isolation, financial hardship, and have huge self-image issues to deal with when you’ve had a brain injury,” Lary said. “Once a person has used up insurance benefits of rehabilitation, there’s not a very bright future on the horizon. Our group helps such people deal with that reality, but more importantly, it explores ways that people can continue their recovery long after funds for medical treatment have been exhausted.”

Orr-Kelly endorsed Lary’s assertion. “Three things happen for me at our meetings,” Orr-Kelly said: “I pick up hints on how I can live a more joyful life. I find companionship with people who experience the same challenges I face, and I have the pleasure of a social event where I don’t have to be self-conscious about the difficulties I have from my brain injury. When anyone faces issues from any major, or even a minor brain injury, whether it’s from a traumatic or an acquired event, they might want to explore our meetings.”

What Happened to Diane Orr-Kelly?

On a wet, January night in 2000, Diane Orr-Kelly, a Certified Public Accountant, was driving from her home in Columbia, Missouri, to Muscatine to spend some time with her mother and siblings before the rush of income tax season began. A semi-tractor trailer truck, traveling at high speed behind her, ran into the rear of her small sports car just south of Mexico, Missouri.

The rear-end collision caused her head to snap back, fracturing the second vertebra of her neck. Then her head hit the car’s steering wheel, causing an injury to the front of her brain. As the car shot forward from the impact, she was ejected from the back window of her car. This sudden jolt caused her liver to tear, which caused massive internal bleeding. Apparently, she hit the radiator of the truck. This caused an injury to the back of her brain. Her body bounced off the truck and rolled down the highway embankment into a ditch, which had deep standing water in it. Huge scalp wounds would have caused her to bleed to death, but her heart stopped, which staunched the blood loss. Because she was immersed in water, her breathing ceased. The passenger in her car, a college-age friend of one of her children who was along for the ride, was killed instantly.

Someone at the scene of the accident started cardio-pulmonary resuscitation, but the time while her heart and breathing had stopped deprived her brain of necessary oxygen causing diffuse anoxia, which destroyed many brain cells throughout her brain. The severe damage to the frontal lobe of her brain diminished her ability to control emotions, solve problems, speak, exercise common sense, and retain data. The impact from hitting the front of the truck damaged her cerebellum and parietal and occipital lobes. These injuries seriously affected her speech, voluntary movement, spatial judgement, short-term memory, and sense of pain.

She sustained other injuries. Cardio-pulmonary resuscitation had broken eight of her ribs, and the spinal cord injury from her broken neck caused partial paralysis of her right side.
Orr-Kelly was air evacuated to the University of Missouri Hospital Trauma Center in Columbia. Since it was a Saturday night on a full moon, the trauma center had staffed up to accommodate the expected mayhem of a college town on such a night. Because it was still early in the evening and the “bar rush” had not begun, there was plenty of highly skilled personnel on hand in the emergency room to treat her multiple injuries.

10 days later, Orr-Kelly emerged from her coma and the long road to recovery began.
Today, Orr-Kelly deals with attention deficits, lapses of short-term memory, and is easily fatigued. She has chronic problems maintaining her balance and her speech is slower than it was before her accident. Other than those issues, her recovery has been remarkable. She is quick witted and has a sunny disposition.