On the mark: Two students excel at air rifle shooting 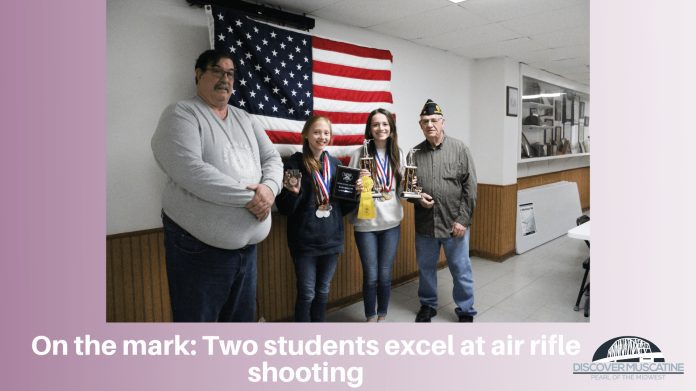 MUSCATINE, Iowa–While shooting a target from across the room without a magnified sight may sound tricky, sophomores Ella Evans and Kiara Hallett have mastered the skill through the Muscatine American Legion’s Junior Shooting Club. This season, both athletes have had remarkable success and may have the opportunity to continue competing at the national level.

Ella first got interested in air rifle shooting six years ago when her grandfather, who knew one of the club’s founders, encouraged her to give it a try. “My grandpa was really good friends with Ray Dietrich, and he invited me to come down and watch one night,” she remembers. “I’ve been doing it ever since.”

About two years later, Ella convinced Kiara to do it, and both have stuck with it. “Ella told me about it, and I figured I’d try it because it was different,” Kiara shared.

The Junior Shooting Club members practice for an hour and a half to two hours, beginning at 6:30 p.m. Tuesday evenings. Along with basic safety skills, participants learn how to shoot accurately in prone, kneeling, and standing positions and how to score their shots. Members also attend competitions across the state, and sometimes even beyond it. More than just an opportunity to demonstrate their prowess, top placing contestants can earn scholarships from the American Legion.

Both Ella and Kiara placed highly at several of the competitions they attended. At the Iowa State Rifle and Pistol Association International Junior Championship, Kiara earned first place and Ella earned second place overall. At the Junior Olympics meet, Kiara placed second and Ella placed third in their age bracket. Because both Ella and Kiara also compete with an additional air rifle team, they may qualify to compete at the Junior Olympics National Contest in Camp Perry, Ohio, later this year.

A unique way for young people to learn about firearm safety and shooting skills and to build character along the way, both Ella and Kiara look forward to continuing their air rifle careers and hope that more young people will join the Junior Shooting Club to allow them to place in team categories as well. “I like how you compete against yourself, but you do it with other people so you better yourself with others,” said Kiara.

Ella remarked that she most enjoys: “the competitions. I like to travel around and go to different shoots.”

After watching the girls grow their skills and dedication, instructor and coach Mike Blanchard could not feel prouder of them. “They’re getting to the point in their career where all their hard work and perseverance pays off.”

If any young people would like to try air rifle shooting for themselves or come see what practices look like, Blanchard encourages them and their families to reach out to the American Legion by calling 563-299-8113. He hopes to have at least five members consistently practicing by next fall, as that number will allow them to qualify for team events.