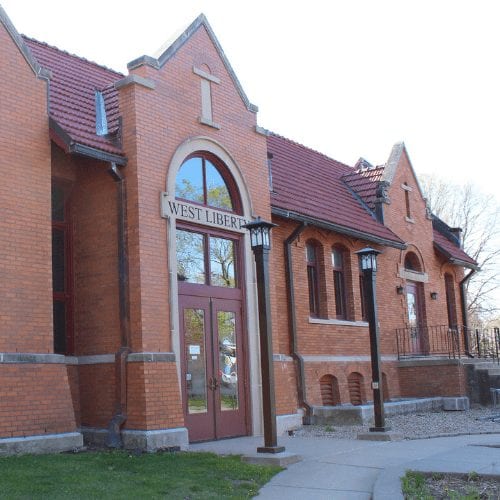 Ruvalcalba just recently completed two large-scale murals at Heritage Park on both sides of a storage facility that is easily seen from the nearby walking trail. On one side of the building is a depiction of downtown West Liberty circa 1910, as though one is standing right in the middle of the dirt road with horse drawn carriages. The other side is of the Hotel and Globe Café from 1910, which includes several trees and a vivid blue sky as the backdrop. “I tried to make the colors antique,” he said of his process.

It took him a couple of weeks to draw out, scale, and then paint the two giant portraits.

This is nothing new to Ruvalcalba, who has been painting for twenty-five years. He has done work on all scales in several cities around Iowa, including Muscatine. His first major mural was done at Pearl Plaza in Muscatine. Actually, it was in Muscatine that he got his start at working on a larger scale than just a typical easel.

In West Liberty, where he has lived for eighteen years, he’s done work at the El Sarape Mexican Restaurant, as well as a mural behind the counter at Marias Restaurant in downtown West Liberty. However, Ruvalcalba holds a special place in the hearts of the members of the West Liberty Heritage Foundation, which owns and maintains Heritage Park and includes the Train Depot Museum. He has already done work for them before. He painted all four sides of a square stone that was once the base of a water system used by locomotives back in the day.
The stone can be found by the gazebo, with depictions of the train depot, trains, and water tower from the past. “I think he’s one of the best,” says Tom Brooke, a long-time community member and member of the Heritage Foundation. “He’s been all over. I just thought it would be nice for all the walkers and bikers to look at when they pass the building,” he added. That’s why he commissioned the work of Ruvalcalba.

In fact, if Brooke has his way, Ruvalcalba is nowhere near finished when it comes to painting at the West Liberty Heritage Grounds. He wants the painter to tackle the back side of the storage building. The plan is for a painting of a Rocket Engine, a concept created by the Rock Island Railroad before it went bankrupt in the 1950s. The railroad ran between Chicago and Peoria.

Whatever happens, Ruvalcalba enjoys being outside when he is painting. He has done it indoors and outdoors. While the elements can be a challenge outside, there is also an audience.
“I like outside because more people are watching me paint,” he says. “Inside only a few people watch; outside people are walking by and watching everything.”

Watching Ruvalcalba work, it is easy to get a sense of the fact that he likes people. During the weeks he painted the storage building, he engaged several walkers on the trail in conversation. “Painting for me is my life,” he says. “I’ve been doing it ever since I was young, and I’ll do it until I can’t anymore.”

He finds most of his inspiration from Rembrant. The Dutch artist from the 1600s is considered a master of the visual art. His use of color depicts a wide subject matter. “I may copy him sometimes, but he’s just the best,” Ruvalcalba says of Rembrant with a smile on his face.
But who knows–maybe 400 years from now, thousands will gather at the Heritage Depot to see Ruvalcalba’s work of today. Art is funny in that way, and beautiful. To see Jesus Ruvalcalba in action, find the West Liberty Public Library’s channel on Youtube.com.