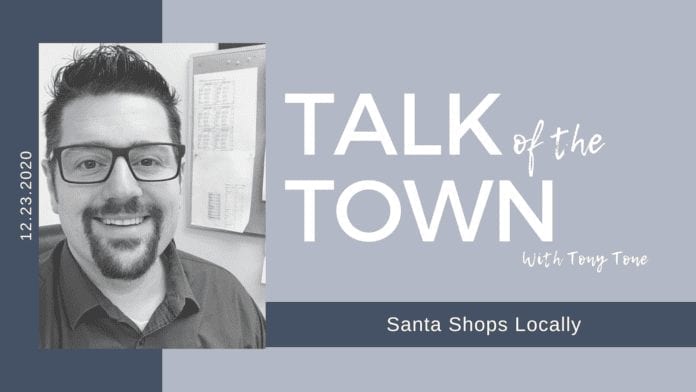 Tony Tone
Tony Tone has worked as a radio personality in Muscatine and the Quad Cities since 2006. He currently serves as Muscatine Community School District Communication and Community Outreach Director and writes Talk of the Town with Tony Tone for the Discover Muscatine newspaper.

When last we met, we were discussing the book by Bill Burnett and Dave Evans “Designing Your Work Life.”...
Read more

Did you know that Santa Claus is often seen shopping in downtown Muscatine? It’s true–the man from the North Pole loves shopping locally and supporting our businesses in the Pearl City.

As a matter of fact, Santa was recently spotted walking out of Flipped Out Furniture on Second Street while trying to go unnoticed. I just so happened to be walking out of The Coffee Belt when I saw a man with a large red coat and a glorious beard. I hustled down the street running past Salon Incognito, but Santa had rounded the corner and must have parked his sleigh on Cedar Street near Pearl City Tattoo.

Maybe, he was heading to the Missipi Brew to pick up some Brew Bucks to use as stocking stuffers for those on the nice list this year. Or, Santa was checking out The Merrill Hotel and was captivated by the breathtaking views of the Mississippi River. Maybe Papa Noel was making a stop at Creations by Oz to check out some jewelry for Mrs. Claus or seeing what unique finds were available at The Wild Thing and Red & Lee Vintage. We all know that Rudolph and the rest of the crew can’t get enough of Skinny’s Big Burrito. That’s one way to get the sleigh moving!

I will give props to those who have continued to shop locally, especially over the last nine months of the pandemic. Our family has plans to get some to-go meals from several downtown restaurants along with gift cards to show our support.

Two weeks ago, I saw a post on social media that talked about supporting local businesses and how they might not be saying that they’re on the brink of closing, but that we should support them like it might happen. Think about it, a Muscatine without a strong downtown is not good for any of us. We need to ensure that all our local businesses have an opportunity to make it through the pandemic and be stronger for having done so. This goes for local businesses located across Muscatine. I don’t want to get any messages claiming I’m only focusing on downtown.

So, here we are my friends, you’re either reading this on December 22nd or 23rd and the clock is ticking for buying those last minute Christmas gifts. If you’re really in the spirit of giving this holiday season, I would of course encourage you to donate to organizations like the Salvation Army of Muscatine County, MCSA, the MCSA Domestic Violence Shelter, or United Way of Muscatine, just to name a few. Santa, it turns out, is also a huge supporter of organizations that continue serving those in need. If only he could leave them a blank check.

I wish you and yours a very Merry Christmas and hope that you’ll consider spending dollars right here in Muscatine.

When last we met, we were discussing the book by Bill Burnett and Dave Evans “Designing Your Work Life.” Last article (the second of...
Read more

MUSCATINE, Iowa--In junior high school and high school, Mike Will discovered his love for music. He dabbled in playing flute, saxophone, and percussion and...
Read more