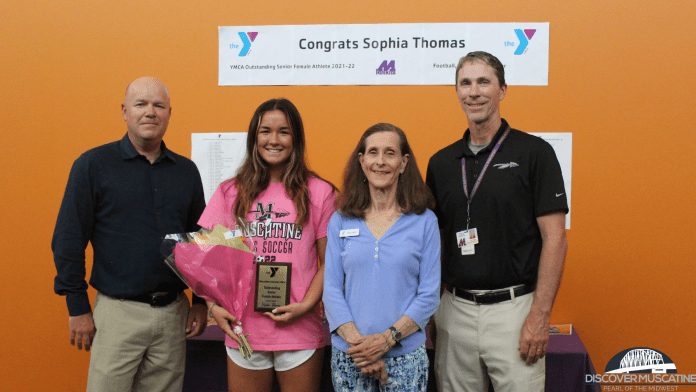 MUSCATINE, Iowa–May 12, the Muscatine Community Y named Sophia Thomas their 46th Outstanding Senior Female Athlete of the Year. Originally started as a way to bring recognition to girls’ sports when it received far less attention, it has continued to honor the progress each successive class of athletes has made. A soccer, basketball, and football player at Muscatine High School, the 43 senior female athletes in Sophia’s grade voted for her to have the honor based on her leadership, sportsmanship, and school spirit.

When Sophia first started playing soccer at the age of four, she did not take to it right away. “I honestly wasn’t really into it,” she chuckled.

However, her mother knew she needed something more to do than just stay at home, so she kept Sophia in it. As she got older, she grew more interested in sports, trying just about everything. Eventually, she realized she liked soccer the most, and continued with it through high school. “I did every single sport, but soccer was the one I stuck with because it’s the most fun.”

In high school, Sophia played center mid, a role she enjoyed because of its versatility, allowing her to play offense, defense, and even score goals. She also liked the leadership role it gave her, as she often found herself in a position to help direct her teammates to make successful plays. Next fall, Sophia will attend Iowa State University to study business, with a possible minor in art or architecture, and to play soccer. She welcomes the opportunities she will have to lead both on and off the field.

Though Sophia loved soccer the best, she kept busy in the winter playing basketball as well. In the fall of 2021 though, she took on a new challenge–football. When the Muskies needed a kicker, she stepped up, trying out the sport for the first time. Sophia enjoyed the new challenge football gave her as well as how much she motivated younger girls to try whatever sports appealed to them, even ones traditionally played by boys. “I think it was really just inspirational for the little girls because they don’t see a female football player every day,” she said. When Sophia would visit elementary schools, she often had girls come up to her sharing they wanted to play football because of her.

In a graduating class filled with athletes, Sophia felt deeply honored to join the ranks of Muscatine’s Outstanding Senior Female Athletes. “I’m super grateful,” she glowed: “It’s awesome–we have so many great athletes in this class. It means so much to me that I got it.”

Muscatine Community Y Health Promotion Services Director Mel Steckel presented Sophia with her award. During the brief ceremony, Steckel read a letter to Sophia from last year’s Outstanding Female Senior Athlete of the Year, Rylie Moss, and Muscatine High School Activities and Athletic Director Tom Ulses congratulated her on her achievement, stating the list of previous winners, “is truly a list of legends from Muscatine High School and Muskie sports.”

MUSCATINE, Iowa--On Jan. 13, members of the Muscatine Police and Fire Departments responded to a call in the 300...
Muscatine Area News