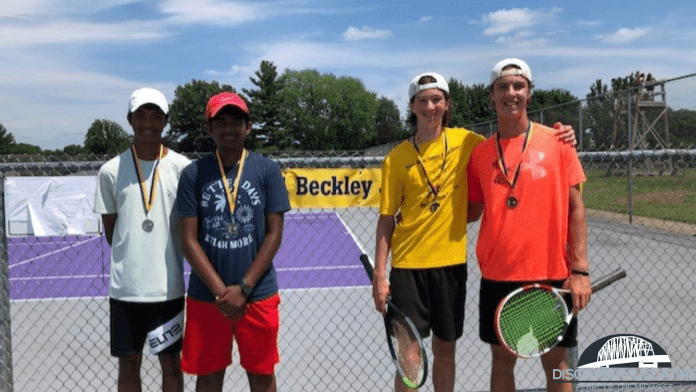 MUSCATINE, Iowa–Each summer, young tennis players from across the Midwest meet up in Muscatine for the T. Beckley Junior Tennis Open. A long standing tournament giving children ages 12 through 18 the opportunity to play against new opponents and further develop their skills, the Great River Tennis Association held this year’s T. Beckley Junior Tennis Open July 8 through 10.

Initially, play started slowly on July 8. No sooner did organizers hand out tennis balls for the boys games at Muscatine High School and the girls games at Weed Park did it start to pour rain. However, after this rain delay, the 40 competitors had an excellent weekend to play. “The weather was just incredibly nice Saturday and Sunday with no humidity and just a hint of a breeze,” recalled Cindy Klebe, a member of the Great River Tennis Association who helps put on the T. Beckley Junior Tennis Open each year.

Once play got underway, players from Muscatine itself as well as from across Iowa, Illinois, Minnesota, and Wisconsin faced off for several outstanding matches. In the 18U doubles competition, Sam Emmert and Ryan Kirkpatrick, both of Muscatine, won first place. Anthony and Dylan Schulte, a pair of brothers from Cedar Rapids, kept winning in the family, with each placing first in the 18U and 16U singles tournaments respectively.

Each day and at both locations, Klebe and other organizers felt impressed with how well the young players handled themselves and received numerous compliments on how the tournament went. “There was good sportsmanship from both the boys and girls,” Klebe reported.

Thought the T. Beckley Junior Tennis Open has ended for this year, the Great River Tennis Association has as additional tournament series that will continue running throughout the summer. June 29, the organization held its first level seven tournament, geared towards beginning tennis players June 29. 10 youth players signed up for that competition, and Klebe hopes to have that many or more at this year’s remaining two tournaments on July 27 and Aug. 31 at Weed Park. Each tournament will offer singles matches to give new players a taste of what competitive play looks like at higher levels. “It give them an idea of what they’re working for,” explained Klebe.