‘The Trial of the Chicago Seven’ – Sustained 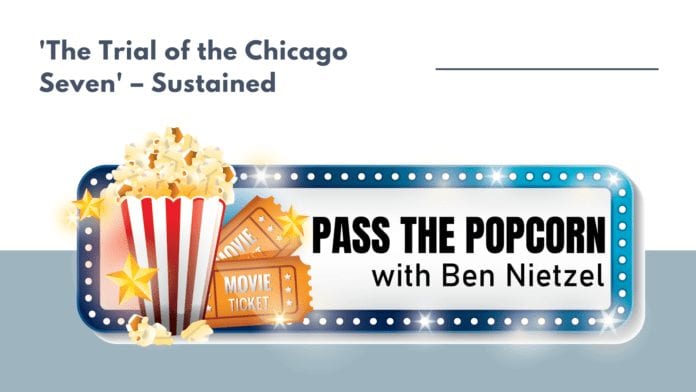 “The Trial of the Chicago Seven” is a new Netflix film detailing the trial of seven protest leaders charged with inciting violence during the Democratic National Convention held in Chicago, Illinois in the summer of 1968.

At its core, the “Trial of the Chicago Seven” is a courtroom drama. While a lot of key information is shown through flashbacks, the meat of the film takes place in and around the courtroom. It seems that in an era of endless sequels and spin-offs, it’s been a long minute since the last compelling courtroom drama. While the “Chicago Seven” does not rise to the level of “12 Angry Men” or “A Time to Kill,” it manages to conjure up plenty of courtroom magic that makes “trial” movies so appealing. The whole film is entertaining, but the courtroom scenes are by far the best bits. Certainly, real courtrooms are rarely as entertaining, but when Hollywood can skip from day one to day 18 of a trial with a simple cut, it makes for entertaining viewing.

“The Trial of the Chicago Seven” has a massively talented cast. It feels like the “Ocean’s 11” of hippy protest movies. Sacha Baron Cohen is a clear force in the film. While widely lauded and criticized for his comedic character acting, Cohen is an outstanding actor and his portrayal of Abbie Hoffman is electric.

Yahya Abdul-Mateen II is awesome as Black Panther leader Bobby Seale, and provides a stark contrast to “the Seven.” Eddie Redmayne as Tom Hayden is likely the most relatable character to most of the 2020 audience, and for non-Harry Potter fans, this might be his introduction as a star. These three just represent a small sliver of what really is an amazing and talented ensemble cast. In a movie with lots of dialogue and very little action, acting is key and the cast of “the “Chicago Seven” crushes it.

Neutral – Reading into it

Unfortunately, it feels like we cannot read, watch, or engage much in 2020 without filtering information through our personal political lens. If one were to do so, intentionally or unintentionally, it might be easy to predict their overall thoughts on the film based on their cable news network of choice. That seems like a mistake. “The Trial of the Chicago Seven” is a very good film on its own merits. It is entertaining, it is informative, and it is very well acted. It is not a justification nor repudiation of anything going on in the world right now. A viewer could twist it into that, but that seems to saddle the film with unfair baggage. Taken as an entertaining look at a snapshot in history, it is a really good watch. Beyond that, viewer beware.

“The Trial of the Chicago Seven” is loaded with talent. This talent takes the drama on the pages of the script and brings it fully to life. It’s amusing, it’s dramatic, and it’s even thoughtful. Taken for what it is, anyone can sit down and enjoy the story it tells. I’d march over to the Fridley Theatre and grab some concessions-to-go before giving this one a watch this weekend!

Adopt Jersey! Breed: female, calico domestic short hair Age: Five-months-old Jersey gets along with everyone! She has lived with other cats and would do well with a...
Read more

1. Evaluate Your Investment Portfolio To identify potential changes to your investment strategy, consider the following questions when reviewing your portfolio: How did your investments perform...
Read more