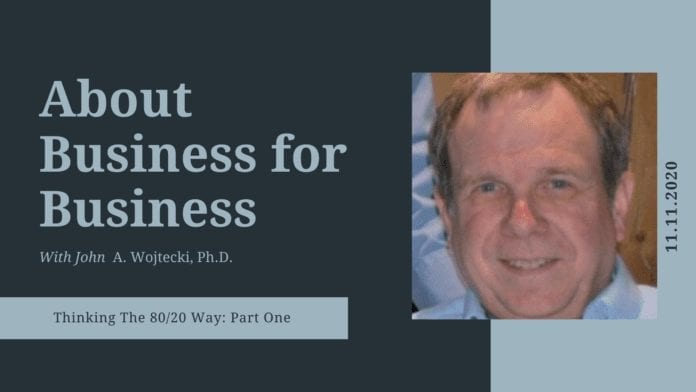 Tim Ferriss interviews leaders, business entrepreneurs, innovators, “those that accomplish,” for his regular podcast. I am a regular listener. There is a healthy approach to business, success, and accomplishing achievements in life in listening to the podcasts and then taking action to implement suggestions from the discussions.

One of the recent podcasts included interviewing Richard Koch. Richard is the author of: ”The 80/20 Principle.” One of the points of discussion was his subsequent book: “The 80/20 Manager.” I thought the discussion was insightful for any entrepreneur and anyone working on self-improvement. The discussion prompted me to borrow the book from our own Musser Public Library. Logging on was easy and the book arrived within two days. Nicely done by the folks at the library.

The 2013 publish date is interesting for the “Manager” book. I am surprised I have not come across this variation of Koch’s initial effort, “The 80/20 Principle” from 1999. Koch maintained in his first 80/20 book that, “a minority of causes, inputs, or efforts usually lead to a majority of the results, outputs, or rewards.”

“Knock-offs” from previous books can sometimes be less than impactful. Somewhat unusual, yet interesting is that the foreword was written by a Matthew Kelly from Singer Island, Florida, who encouraged Koch to specifically address managers. The message in this foreword is to ask, “if you are willing to think in a new way?” If you remember, thinking differently was specifically mentioned in my last article. I see an opportunity here for specifics as it applies to thinking differently.

In thinking differently, I had to do some research. Kelly wrote in the foreword, “The genius of Richard Koch is that he makes the counter-intuitive accessible.” What does Kelly mean by that statement? The challenge for me was to explain counter intuitive in an easily understandable manner. In the dictionary: counterintuitive is used as one word, not two as used in the foreword, and is defined as, “contrary to intuition or to common-sense expectation (but often nevertheless true),” or, “something that is not easily understood in an instinctive fashion.”

Koch addresses the 80/20 principle for managers when he asks the question whether the reader is overwhelmed. Koch strongly asserts that work does not have to be that way (overwhelming). Using the 80/20 principle helps the entrepreneur, the individual seeking to accomplish something that has a focus on the important few as opposed to the unimportant many – and be less overwhelmed.

Steve Jobs, at Apple Computers, was noted for eliminating many products that were being developed, and gave direction to focus and dedicate those in the company to a select few. The perfect example is in 1997 when Jobs returned to Apple, 70% of products were eliminated and a significant focus was directed to the remaining 30%. The success after is a wonderful example of application of the 80/20 principle.

If you have an 80/20 Principle that you would like to share. Please drop me a note at [email protected].

MUSCATINE, Iowa--Saturday, Nov. 21, the Salvation Army of Muscatine kicked of their Red Kettle Campaign. Though the event had...
Read more
City of Muscatine

MUSCATINE, Iowa – A Muscatine man was killed in a car-pedestrian accident Saturday (Nov. 21, 2020) morning in the 3600 block of Grandview Avenue (US...
Read more
Muscatine Area News

MUSCATINE, Iowa--For years, the Alzheimer's Association has had a strong presence in Muscatine. Through several support groups, online educational classes, and the Walk to...
Read more
Muscatine Area News

https://www.youtube.com/watch?v=Bwc8JQI2PT4 This content provided by the City of Muscatine YouTube page and distributed as a community service.
Read more

Adopt Jersey! Breed: female, calico domestic short hair Age: Five-months-old Jersey gets along with everyone! She has lived with other cats and would do well with a...
Read more

1. Evaluate Your Investment Portfolio To identify potential changes to your investment strategy, consider the following questions when reviewing your portfolio: How did your investments perform...
Read more