Weather does not slow down local construction projects 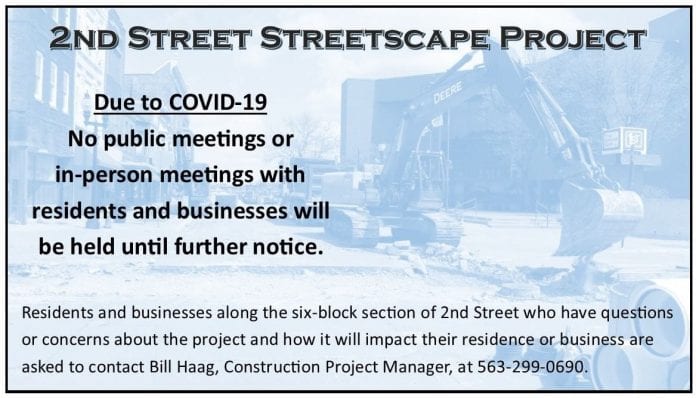 MUSCATINE, Iowa – Two spring snowfalls have not halted work on construction projects in Muscatine. Taking advantage of reduced traffic and business restrictions due to local, state, and federal COVID-19 guidelines, contractors are picking up the pace especially in Downtown Muscatine.

Work on the 2nd Street Streetscape Project began on Monday (April 13) in the block from Cedar to Walnut streets. This block has the most work to be accomplished during the two-year project and includes replacement of a collapsing sanitary sewer line, curb-to-curb pavement restoration, and replacement of sidewalks on both sides of the block. 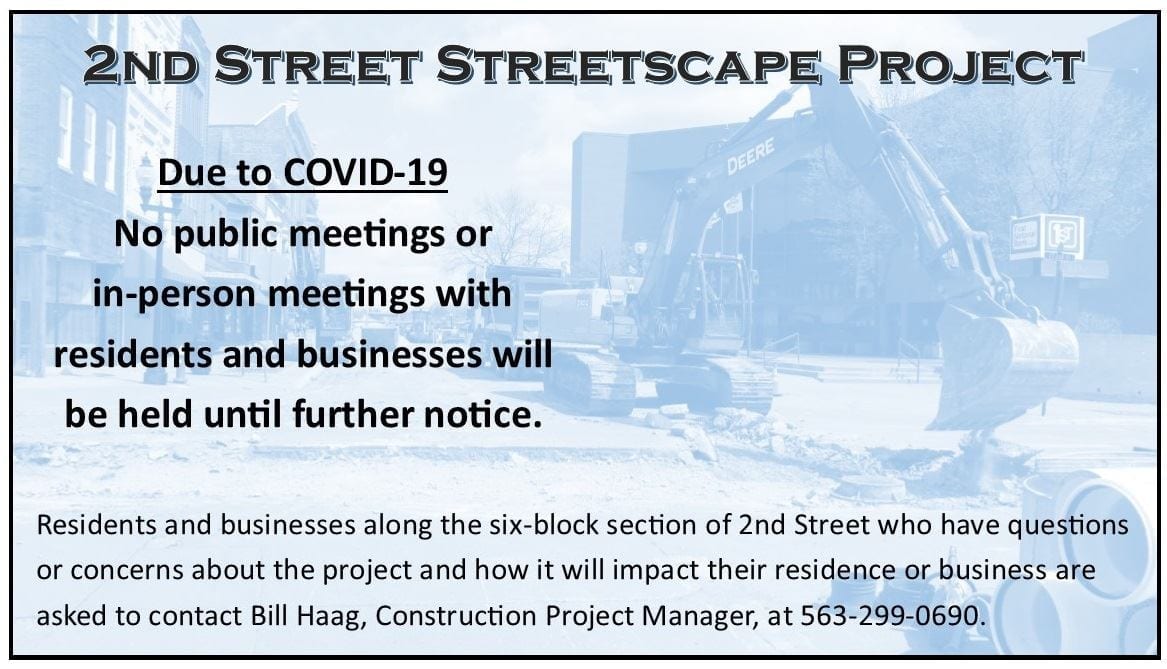 The extent of the work necessitated the full closure of the 300 block of East 2nd Street, but this is the only one of the six stages that will see a full closure during construction. Each block of the project is assigned a stage and each side designated either “A” or “B” with work on one side of a block completed before the opposing side is started. The current work is being conducted in Stage 5.

Work is expected to be completed by the end of May.

The next stage to be worked on will either be Stage 6 (Walnut to Mulberry) or Stage 4 (Sycamore to Cedar) depending on the progress of the Mulberry and 2nd Street roundabout. There is some sewer replacement work and pavement replacement in Stage 6.

Additional information can be found on the 2nd Street Streetscape Project page on the City of Muscatine website.

Underground work on the Mulberry Avenue-2nd Street Roundabout Project has been completed with the contractor working on grading the new intersection before the area is proof rolled and rock added. Pavement restoration is tentatively scheduled to begin in later this month with the project wrapping up by the end of May, depending on the weather.

Mulberry Avenue is currently closed from the #1 Alley to 3rd Street and 2nd Street is closed from Mulberry Avenue to Orange Street. Eastbound traffic on Mississippi Drive is detoured at Iowa Avenue to 5th Street to Park Avenue. The detour will remain in effect until the project is completed.

Pavement restoration of the Houser and Cedar intersection has been completed with the contractor scheduled to seal the joints Monday (April 20) before opening up the intersection by the end of the day on Monday. The work was originally scheduled to be included in the 2020 Full Depth Patch contract but was moved up due to the reduced traffic and school closure associated with the COVID-19 outbreak. Work in the intersection began March 31.

The 2020 projects will be sent out for bid later this spring. The Full Depth Patch project will be smaller than this past year as the city will focus on hot mix asphalt overlays of a number of street sections and alleys in 2020.

The trail through the Arbor Commons subdivision will be completed once pavement work in that development has been completed.

Phase 4C of the West Hill Sanitary and Storm Sewer Separation Project (WHSSSSP) began March 16 with underground work for the first stage (Iowa Avenue from 8th to 9th Street and 9th Street from Iowa Avenue to Chestnut Street) completed. Several individual resident water services were to be connected in the next week before pavement restoration begins. Once this work is done, the contract will move to the second stage starting at Linn and 8th Street and working toward Broadway.

The Park Avenue Four-to-Three Lane Conversion Project is scheduled for the 2020 construction year with a public hearing scheduled May 7 Muscatine City Council meeting. The project will convert Park Avenue from four-lanes to three (two traffic lanes with a center turn lane) from Harrison Street to the Mad Creek bridge. A June 16, 2020, bid letting is planned by the State of Iow. No detours are planned during the work but there will be lane restrictions.

The 2019-2020 Alley Asphalt Overlay Project will begin once the asphalt plants reopen for the 2020 construction season. A total of 11 alley segments are on the list for asphalt overlay. The proposed alleys are: 400 block of Busch Street; Grover and Charles (New Hampshire to Hershey); Salvation Army at Oregon and Illinois (Earl to Baker); Bond and Bleeker (Grandview to Liberty); Iowa and Sycamore (East 9th to East 10th along with East 10th to East 11th); Taylor and Clinton (New Hampshire to Hershey); Hawthorne and Washington (Orchard to Park); Hagerman and Lorenz (Terrace Heights to Roscoe); 4th Street Park alley (Locust between 3rd and 4th streets); and Pine and Linn (3rd to 4th streets). Plans for the 2020-2021 Alley Asphalt Overlay Project and the 2020-2021 Street Asphalt Overlay Project are being developed and should go out for bid later this Spring.

The Mississippi River crested at 18.93 feet on April 11 and is expected to continue a steady fall over the next several weeks and receding below flood stage (16-feet) by April 24. The river is currently at 18.1 feet and has been above flood stage since March 24.

CHICAGO – The Government Finance Officers Association of the United States and Canada (GFOA) recently announced that the City of Muscatine, Iowa, has received GFOA's...
Read more
City of Muscatine

MUSCATINE, Iowa - The City of Muscatine is halfway through the second round of fall leaf collection and, despite the large amount of leaves being...
Read more
Local Government and Politics

LETTS, Iowa--This holiday season, the Letts Public Library Trustees look forward to taking on the role of Santa's wrappin' elves. Through this event, they...
Read more

CHICAGO – The Government Finance Officers Association of the United States and Canada (GFOA) recently announced that the City of Muscatine, Iowa, has received GFOA's...
Read more

MUSCATINE, Iowa - The City of Muscatine is halfway through the second round of fall leaf collection and, despite the large amount of leaves being...
Read more