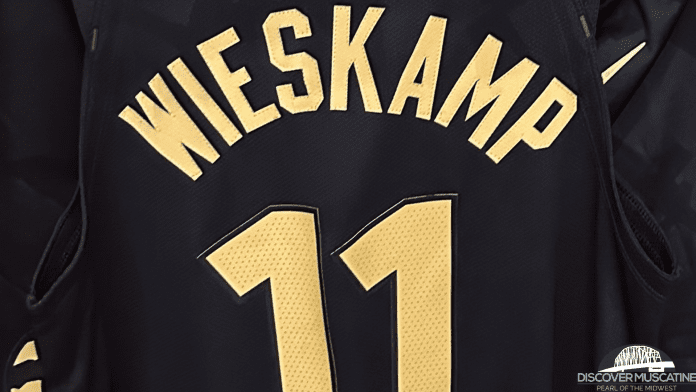 A longtime basketball powerhouse in Muscatine, Wieskamp started his career at Muscatine High School, where he broke the school’s all-time scoring record and led his team to their first state tournament in 16 years. He then played basketball at the University of Iowa for three seasons before entering the draft and signing with the San Antonio Spurs. During the off season, Wieskamp returned to Muscatine to host his very first youth basketball clinic along with his now wife, Makenzie Meyer.

As the basketball season continues, teams have the opportunity to try out players they have caught their eyes through short-term contracts. Wieskamp shared that the Raptors have had interest in him for some time, and he welcomes this chance to show them what he has to offer. “I got the opportunity to sign a 10-day with the Toronto Raptors by playing well throughout the G-League season with the Wisconsin Herd,” he said. “The Raptors were a team that really liked me in last year’s draft, and they wanted to give me an opportunity to show what I can do and continue to develop.”

Though 10 days may sound like only a short period of time, it will give Wieskamp the opportunity to practice with the team and possibly play in several games as well, showing off his various skills. If the Raptors would like to see more or continue determining how Wieskamp works with other players on the team, they may sign him to one more 10-day contract before making a decision on whether to offer him a longer term contract.

Whatever happens, Wieskamp wants to take away as much experience and knowledge as he can from his time with the Raptors and use it to continue improving his game. “I’m super excited about signing with the Raptors and I look forward to the opportunity!” he enthused. “I hope to take advantage of every opportunity that I get and learn as much as possible.”

Though Wieskamp does not fully know where his basketball career will take him next, he plans to continue playing his best, no matter what team he finds himself on, and to continue taking every new opportunity he gets to keep growing as a player and to play at a higher level. “My goal is to just continue getting better and always enjoy the game I love.” Wherever he goes and continues to play, Wieskamp’s fans in Muscatine will follow his career and cheer him on from his hometown.